Minister Gigaba was speaking at the unveiling of a new operating model for the festive season period at OR Tambo. 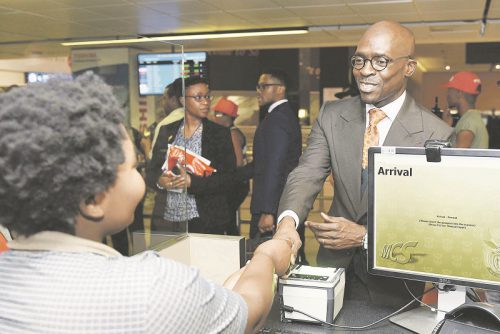 Home Affairs minister, Malusi Gigaba greeting Immigration officials during a walk about of the immigration section of OR Tambo International Airport before briefing media about the festive season plans for the Immigration department of Home Affairs, 8 December 2016.Picture: Neil McCartney

The Department of Home Affairs is preparing for the onslaught of overcrowded ports of entry as millions of travellers are expected to flock to South Africa this festive season.

Addressing media at the OR Tambo International Airport, Gigaba said that the department’s border management coordinating committee was operating for the first time at South Africa’s points of entry after a 2014 Cabinet decision to take responsibility for the coordination of border management mandates.

“We are beginning to place home affairs at the centre of management, not only of the borderline but our ports of entry, ensuring that it plays its role.”

The department will see new rules applying at international arrivals for South African and first time foreign travellers, with the latter now expected to use separate entrances at the terminals for the purpose of having a full set of finger prints taken before being allowed through.

There will now be 92 additional staff members at the airport for the duration of the festive season to deal with the expected traveller influx.

But Gigaba said that long-term plans were in the pipeline to overhaul South Africa’s ports of entry as soon as next year.

South Africa’s six major commercial land ports of entry are set to be the focus of this overhaul.

“We pay particular attention to those because in terms of traveller volumes they almost match OR Tambo,” said Gigaba.

“The difference at Beitbridge is that you also have vehicles – light and heavy – and they stretch for kilometres.

“Next year we hope to finalise a plan to completely overhaul the infrastructure,” said Gigaba.