Here are the top five political moments from this year.

The year 2016 has certainly been engraved into South Africa’s history books as a highly politically charged time. The intrigues have been thrilling yet serious at the same time, considering how young our democracy is and where we come from as a nation.

The year began with the damning judgment against a sitting head of state, whose time in office has been marred by scandals and allegations of corruption.

Many analysts and political commentators thought the Nkandla-gate debacle, which resulted in the fleecing of more than R200m worth of taxpayer’s monies, would be the end of President Jacob Zuma’s time in office.

However it only ended in a half-apology from Zuma – which was ,in turn, accepted by the African National Congress’ (ANC) highest decision-making body – after two years of obfuscation and spin-doctoring the public protector’s report into one of the country’s biggest corruption scandals after the arms-deal saga.

2016 will also stand out as the year court battles intensified and played out before our television screens. And like the numerous court battles we have witness this year, Zuma seemed to always lose flat out.

2017 still has a plethora of court cases coming involving political heavyweights and the opposition, including civil society organisations, who are ready to haul leaders to account (of course, there’s always a point to score).
Here are the top five political moments from the year 2016:

The Nkandla judgment was a precursor for the rest of 2016 considering its seminal nature. The unanimous ruling by all 12 justices of the ConCourt was only the beginning of the ANC’s internal turmoil, which accumulated into an unexpected rebellion against Zuma’s leadership at the governing party’s last national executive committee meeting in November.

Zuma said he welcomed the court’s judgment on his spending at his Nkandla home “unreservedly” and said the judgment had underscored the values of the country’s hard-won freedom and democracy.

“The judgment has further strengthened our constitutional democracy and should make South Africans proud of their country’s Constitution … this is a groundbreaking judgment.

“I respected the judgment and will abide by it … I have consistently stated that I would pay an amount towards the Nkandla nonsecurity upgrades once this had been determined by the correct authority,” he said in his apology to the nation.

Undoubtedly the biggest political scandal this year was the prosecution of Finance Minister Pravin Gordhan by the National Prosecuting Authority (NPA) under the leadership of Advocate Shaun Abrahams. 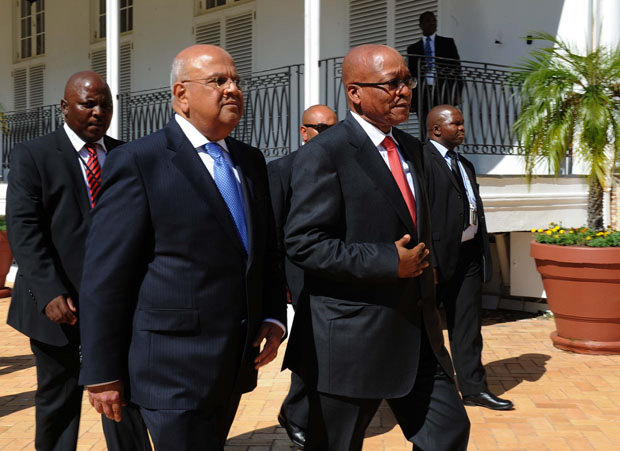 The public prosecuting body pursued fraught charges against the minister, an ANC veteran and respected technocratic, who was redeployed to National Treasury following the 9/12 debacle that cost the country billions of rands in a short span of time, and later exposed Zuma’s obvious lie to the nation that former finance minister Nhlanhla Nene would be heading to the BRICS Development bank to represent the country.

A little-known former mayor, David van Rooyen, was brought to Treasury, sparking a crisis for in the currency markets, as one of government’s well-oiled institutions seemed to be vulnerable to the whims of politicians. 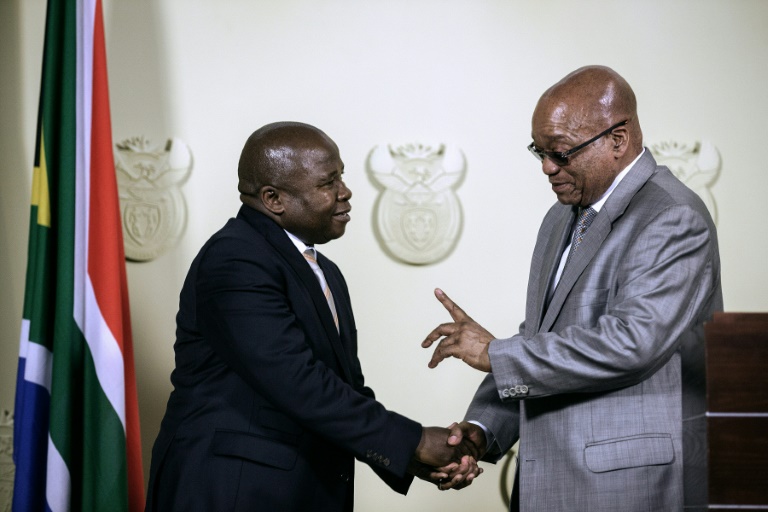 AFP/File / Gianluigi Guercia
South African president Jacob Zuma (R) swore in legislator David Van Rooyen (L) as his new finance minister on December 10, 2015 — only to dismiss him late in the evening of Sunday, December 13 after markets balked and the national currency crashed

On October 31, Abrahams withdrew fraud charges against Gordhan and former SA Revenue Service (SARS) commissioner Oupa Magashula and his deputy, Ivan Pillay, who were accused of approving early retirement for Pillay and rehiring him as a consultant, apparently costing the tax agency more than R1.1 million.

Gordhan has consistently denied any wrongdoing and said in the past the charges were politically motivated.

In his letter to Gordhan’s attorney, the chief prosecutor said that after “perusal” of the case he had decided to “overrule the decision” to prosecute, saying he had directed that the summons against the trio be withdrawn with “immediate effect”.

The charges were dropped after a 2009 memorandum from a legal executive at Sars showed that there were no reasons why Pillay could not retire early and be reappointed again.

It emerged in November in a case lodged by civil society organisation’s Freedom Under Law and the Helen Suzman Foundation that Hawks head Lieutenant-General Berning Ntlemeza wasn’t pleased with the NPA’s decision.

In a series of letters he sent to Abrahams, the Hawks boss, said to be Zuma’s ally, expressed his anger at the withdrawal of the charges and accused the prosecutor of not acting in good faith.

3. The winds of change were always near 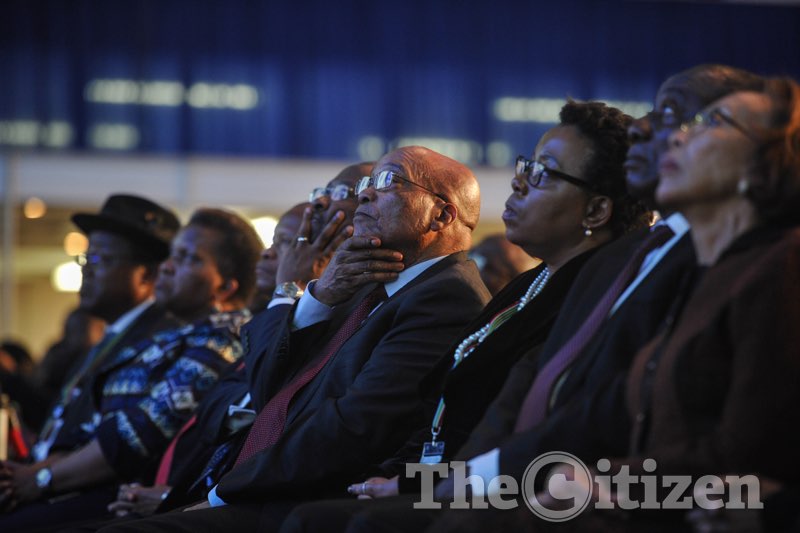 The 2016 local government elections were dubbed the most contested elections in South Africa since 22 years of constitutional democracy.

The ruling ANC, which has been  largely credited with liberating the country from white minority rule, faced its major electoral defeat from the DA, which managed to significantly shrug off the ANC’s support base in urban metropolitans despite previously struggling to court the black middle-class vote.

See map of the key metros below

Like the Nkandla CourtCourt judgment, the elections were important in a sense that they brought about a real and sustained challenge to Zuma’s hold over the NEC later into the year.

With a massive task ahead – correcting the ANC’s misdeeds in the City of Joburg, Africa’s economic hub, the country’s administrative capital, Tshwane, and Nelson Mandela Bay – the DA earlier this month announced some of its successes since a 100 days they came into power.

The party has unfortunately been plagued by perceptions of racism and discriminatory practices, regardless of being led by a black leader. 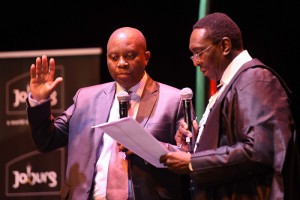 Newly elected Mayor of Johannesburg, Herman Mashaba is sworn in by Judge President, Dunstan Mlambo during an event at the Joburg Theatre in Braamfontein, in which he and his MMC’s were sworn into office, 26 August 2016. Picture: Neil McCartney

4. Councillors take each other on at council meetings 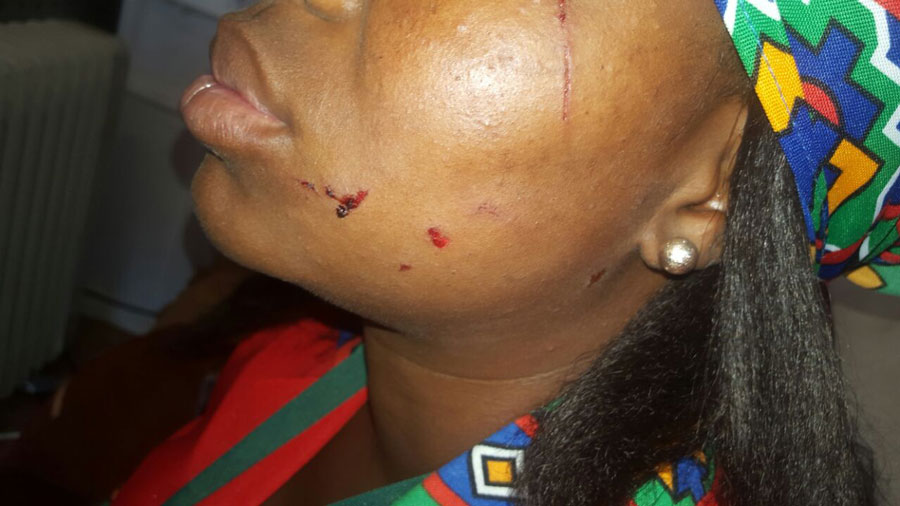 Change seems difficult to handle for ANC councillors at Nelson Mandela Bay metro. In October the councillors were accused by the municipality’s mayor Athol Trollip for planning a brawl that broke out during a council meeting.

ANC councillors apparently disrupted a meeting discussing a disciplinary matter and fought with DA councillors, resulting in shots being fired by security guards within the council chambers.

One ANC councillor apparently smashed a DA councillor with a glass water jug on the head.

The mayor has since said security will be bolstered in the wake of the incident.

In the City of Tshwane, scuffles broke out earlier in September when disruptions, insults and threats  become the order of the day and marred the first ordinary sitting of the council.

ANC and EFF councillors reportedly got involved in a scuffle less than an hour into the meeting held at the Sammy Marks Council chamber.

The drama apparently started when an EFF member commented on the racism row that engulfed Pretoria High School for Girls earlier in the week.

The councillor accused the former ANC-led administration of failing to eradicate discrimination in the city.

“We applaud the pupils of Pretoria High School for Girls; instead of playing in the playgrounds with their classmates they went out to fight a war that was meant to be fought by the previous regime of the ANC … They’ve been ruling for the past 22 years, but they failed to fight this white supremacy and racism we see in our country,” the councillor said.

The EFF then turned its attention to executive mayor Solly Msimanga and warned him not to rest on his laurels, as he too would be held accountable if he failed to act.

5. The Stare of Capture report 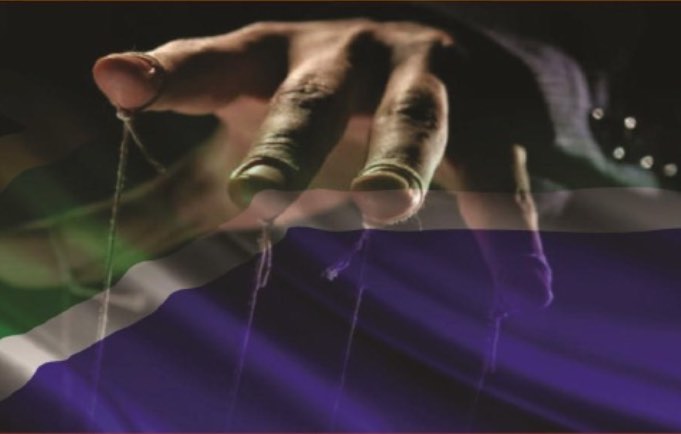 The image that accompanies the public protector’s ‘State of Capture’ report.

After attempts by Zuma and two of his Cabinet ministers linked to the Gupta family to block the release of the State of Capture report. On November 2, the explosive document into alleged improper and unethical conduct by the president and other state officials relating to irregular relationships and the involvement of the Gupta family in the removal and appointment of ministers and directors of state-owned companies, was made public.

This came after Zuma withdrew his application to interdict the release of the report.

“My instructions are to withdraw the application,” his lawyer Anthea Platt told a full bench of the North Gauteng High Court in Pretoria. 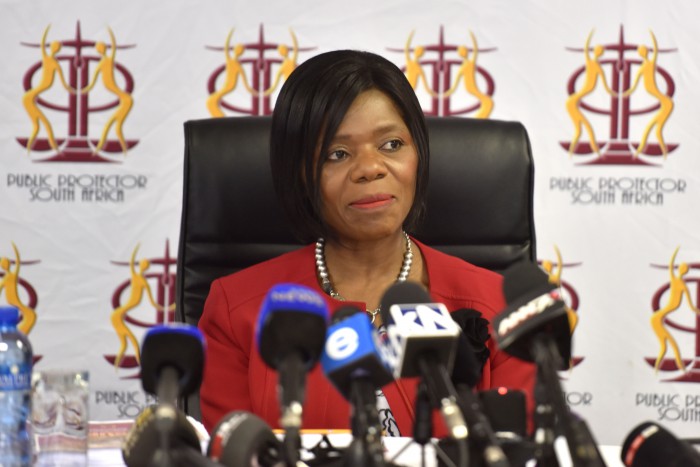 The court had also permitted the EFF, DA, Congress of the people and United Democratic Movement to oppose Zuma’s application.

Here are some of the key findings of the report:

There is no evidence indicating that Zuma as head of the executive did anything to investigate claims made by Deputy Finance Minister Mcebisi Jonas that the Guptas had offered him the finance minister post in December last year before, Nhlanhla Nene, was sacked from his position.

This is despite the fact that the allegations were in the public domain.

Eskom CEO Brain Molefe is friends with members of the Gupta family, according to the report’s evidence and information obtained. In his interview with Madonsela, Ajay Gupta admitted that Molefe was a “very good friend” and often visited his home in Saxonwold, Johannesburg.

Molefe previously confirmed their friendship in a media interview and has always said he saw nothing wrong with the state doing business with the Guptas. He will step down as Eskom CEO effective from 1 January 2017.

Jonas, in his discussion with Gordhan about the Guptas offering him Nene’s job, “stated that they [the Guptas] informed him they made R6 billion from the State and wanted to increase it to R8 billion.”

The family apparently also said they could report ministers who refuse to take their orders to their superiors to deal with them.

The report confirmed that Des van Rooyen was at the Guptas’ Saxonwold compound the night before he was appointed Finance Minister on 9 December 2015, according to cellphone evidence. However, Ajay denied this in his interview with Madonsela.

Ajay Gupta apparently said Treasury was a stumbling block; he needed to get rid of its director-general Lungisa Fuzile and other key officials.

'It's an assumption': Duarte clarifies ANC's claims of sabotage at Eskom
4 hours ago
4 hours ago
PREMIUM! 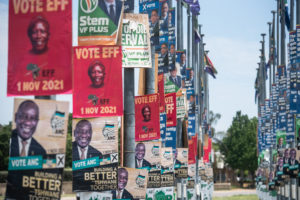 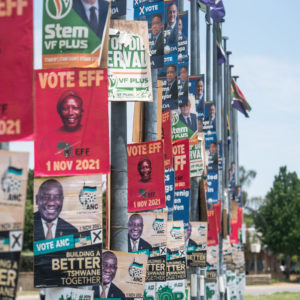 Daily news update: Spotlight on Tembisa 10, Niehaus vs ANC and load shedding to move to stage 3
11 hours ago
11 hours ago

'It's an assumption': Duarte clarifies ANC's claims of sabotage at Eskom
4 hours ago
4 hours ago
PREMIUM!

Daily news update: Spotlight on Tembisa 10, Niehaus vs ANC and load shedding to move to stage 3
11 hours ago
11 hours ago