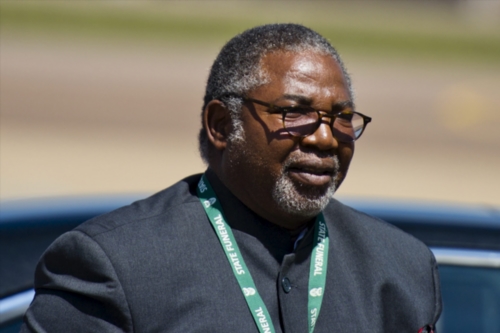 African National Congress (ANC) veteran and former cabinet minister Charles Nqakula has written an open letter to one of the SABC 8 journalists who testified before a parliamentary ad hoc committee probing the fitness of the public broadcaster’s board to hold office.

In his letter addressed to journalist Lukhanyo Calata, who was one of the eight journalists who were fired earlier this year (and then reinstated by the labour court) for openly speaking out against banning the airing of protest visuals, Nqakula applauded him and his colleagues for their bravery displayed before MPs last week Monday.

“You reminded me of your father, Fort, when you courageously challenged what you saw as a wrong,” Nqakula said.

Calata’s father, Fort Calata, was one of the anti-apartheid activists known as the Cradock Four who were killed by apartheid security forces in June 1985.

Lukhanyo Calata testified that embattled SABC executive Hlaudi Motsoeneng probably has the support of President Jacob Zuma as the explanation for why the former Free State junior producer rose to become such a powerful figure within the state broadcaster.

Like his colleagues Thembeka Gqubule, Krivani Pillay and Vuyo Mvoko, Calata testified that the censorship and slanting of news continued at the SABC.

Nqakula, a former journalist and member of the union of black journalists, apologised for not speaking out earlier against the crisis at the SABC, saying the events at the public broadcaster pointed to divisions within the governing party.

He has also urged ANC members to speak out to protect the country’s constitutional democracy.

“All who have been involved in the struggle, even being on the fence, questions relating to censorship and so on, ought to have risen up and then voiced our displeasure at was what happening at the SABC. Part of the apology relates to that, I should have done the same.

“There are a number of things that are happening of which some of us are unhappy. And what I intend to do as many of my friends and comrades also, is to ensure that we are going to be intervening in many of these instances where things are going awry,” he told eNCA on Tuesday afternoon.

He said there was a “reawakening” of the ranks of the ANC, referring particularly to the recently concluded national council meeting of Umkhonto weSizwe (MK) veterans in Rivonia, Johannesburg, at the weekend.

“Recently there was a big assembly of former MK cadres who met together and were also talking about these sort of things. I am part of MK although I was not at the assembly for reasons that my comrades know.

“The fact of the matter is that I align myself with the decisions that were taken there. It’s part and parcel of what I should call the reawakening of the ranks of the ANC to ensure that the ANC in a sense is rebuilt right from the bottom to the top,” he said.

Asked if he supports calls by some MK veterans for Zuma to resign as the country’s president, Nqakula said he was not interested in individuals, but the ANC’s wellbeing.

Among the resolutions taken by the MK council was to work against factionalism and root out corruption within the party and a review of its constitution.

The council said it would be requesting a meeting with the ANC leadership as early as January to discuss their resolutions.