The EFF CIC's tweets this year were lit! 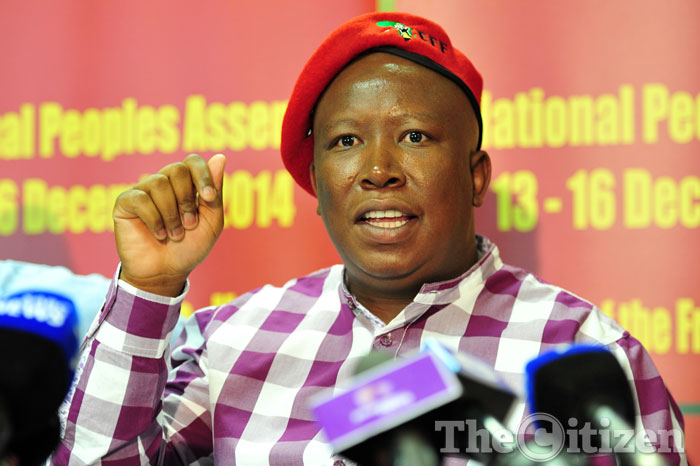 Leader of the Economic Freedom Fighters (EFF) Julius Malema has kept us thrilled this year through his entertaining, yet random tweets that have kept us talking.

After surviving the political wilderness following his expulsion from the ruling African National Congress (ANC) in 2012, he established his own radical party that’s courted masses of young people. Malema is clearly a force to be reckoned with in our political landscape.

Here are the top tweets from the firebrand leader from this year:

He must first get 20k national votes before he gets at least a mention from me not even a debate otherwise he remains irrelevant,Ok…

In the September he lashed out at Kenny Kunene over comments he made on SABC2’s Morning Live.

Malema said Kunene must first get 20 000 national votes before he gets a mention or a debate from him. “Otherwise, he remains irrelevant,” further saying in Sepedi “Wa swa moloi” (the witch is burning).

Racists must be fought everywhere including those hiding behind the pulpit… pic.twitter.com/JyNk9SSyet

In June, he appeared to lash out at pastor Andre Olivier of the Rivers Church for his alleged racist comments.

He commented about the controversy around the pastor’s sermon on Twitter and in a tweet held a clearly veiled threat that services at the church would be “different” if the pastor did not “fall”.

The children of the black nation should take a stand, is now or never. We want our Land now pic.twitter.com/2YZo4gSVVO

Malema has always reiterated his call for the land to be “returned” to black people. In November, he tweeted a meme of a black child asking Santa Claus for land.

His message to white South Africans for this year’s Heritage Day, he encouraged his white compatriots to make more of an effort to pronounce African names as they were intended.

Boys and Boys, the problem is Mabala Noise but otherwise the music is proper @MAJORLEAGUEDJZ pic.twitter.com/1PDAEQu1Jc

He has also shown us it is possible to appreciate good music despite what you may think of the label behind it.

He took to Twitter on to compliment Mabala Noise’s Major League DJs and said their music was “proper”. “Boys and Boys, the problem is Mabala Noise,” he said.

She's my friend and it's her baeday today, happy earthday my babe girl. I will always be indebted to u 4 ur loyalty. pic.twitter.com/KkXbvVaROb

Malema left some of his followers wondering if his Twitter account had been hacked after he posted a picture of his “friend” and model Babalwa Mneno. However, it was not the birthday message that raised eyebrows.

The picture of Babalwa Mneno shared was rather sexy, with the model in a white shirt and what looks like underwear, if not very short shorts. It seems the model was in a club and smoking a cigar.

We must say, Mneno still has it even after all her years out of the spotlight. Even the EFF’s Mandisa thinks so too.

It seems SA politicians really are on a mission to kill the Ke Dezemba Boss spirit this year, as some of them warned citizens to limit their expenditure.

The CIC took to the social networking site to warn followers against carelessly spending money and forgetting to pay the necessary bills.

In Sepedi, he said people were now saying Ke Dezemba Boss but would change their tune in January 2017 when school fees and rent had to be paid up. Though most were in support of his statement, some complained, saying he should let people enjoy their money.

I lost respect for her the day she called @MbuyiseniNdlozi a rapist because they disagreed politically, so what she tweets matters not 2 me

An apparently random tweet by Malema appeared to suggest that he “lost respect” for a woman who called party spokesperson Mbuyiseni Ndlozi a rapist over what was actually a political disagreement.