The minister of water and sanitation said the investment aimed to guarantee the water future in support of the country’s economic and social needs. 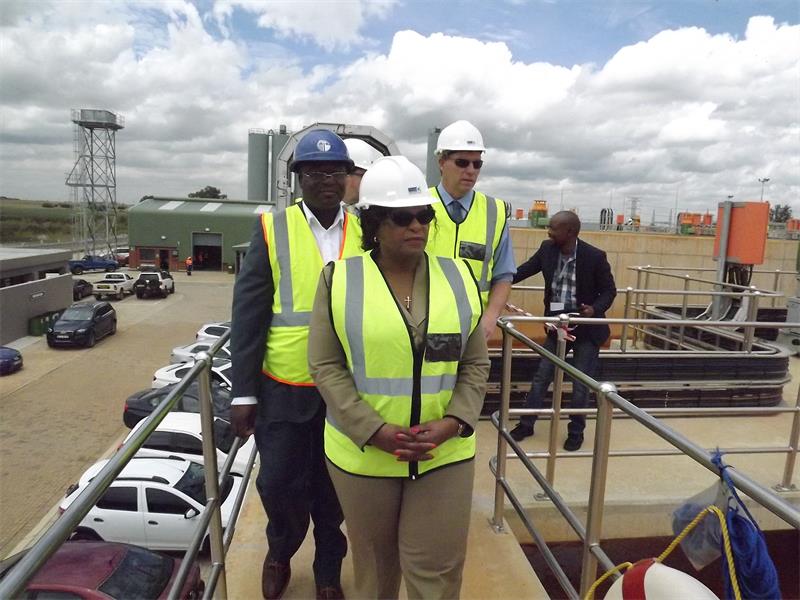 Former minister of Water and Sanitation, Nomvula Mokonyane, at the launch of the Eastern Acid Mine Drainage Treatment Plant in Springs. Picture: Springs Advertiser

Minister of Water and Sanitation Nomvula Mokonyane has assured the residents of Springs that the sludge from the newly built Eastern Acid Mine Drainage (AMD) Treatment Plant in the area will be deposited into a mine, reports the Springs Advertiser.

Speaking during the launch of the plant on Friday, Mokonyane said the main function of the plant was to respond to the pollution of freshwater and ensure the rising water levels in the abandoned Grootvlei Mine did not contaminate groundwater.

“It is the largest treatment plant in the world and is part of the Witwatersrand’s Western and Central Basins, where there is a critical challenge of AMD.

“We are currently busy with a pilot study which involves the deposition of sludge in the shaft at 700 metres below surface,” she said.

Mokonyane added the new plant was one of the three plants that were built as long-term solutions to provide and secure water for the future in the province.

“This is a planned intervention to turn the acid mine drainage problem into a long-term sustainable solution.

“We are now able to produce fully treated water that will increase water supply to the Vaal River system,” she said.

“The plant has been completed and was declared operational on September 16.

“It is one of the largest plants in the country, producing 110 megalitres per day,” Mokonyane said.

The long- and short-term costs of the construction of the plant are estimated to be about R10 billion to R12 billion.

“This is an investment aimed at guaranteeing our water future in support of the country’s economic and social needs.”

Mokonyane said the country had, for the past three years, been going through a drought that threatened national water security, but that through the new AMD plant, they would be able to secure South Africa’s “water future” for the next 30 years.

She urged residents to continue using water wisely and responsibly.

“We are encouraging both domestic and industrial users to use water wisely,” she concluded.