Why opposition parties in Africa struggle to win power Over the last three decades there’s been some progress towards institutionalising multiparty democracy in sub-Saharan Africa. Despite this elections in the region rarely result in changes of government.

A recent survey by Afrobarometer – a non-partisan African research network – sheds some light on why this is the case.

But the results also show that opposition parties face major obstacles to winning majority support. These include the fact that they aren’t trusted as much as governing parties and that very often they aren’t seen as a viable alternative to the dominant ruling party.

All five countries are governed by parties that emerged from liberation movements and have been in power for decades since independence. Although some of these incumbents have lost some electoral support in recent years, opposition support has not been high enough to unseat them.

The latest findings mirror the results of a survey in 36 African countries in 2014/2015 which found that opposition parties had the lowest levels of popular trust among 12 types of institutions and leaders. While trust in ruling parties was 46%, it was only 35% for opposition parties.

This was an improvement over the situation more than a decade earlier when trust levels in opposition parties was much lower. 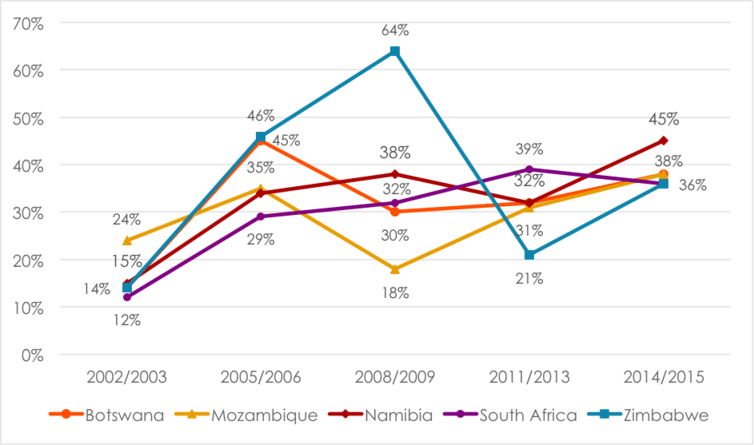 Respondents were asked: How much do you trust each of the following, or haven’t you heard enough about them to say: Opposition political parties? (Percentage who say ‘somewhat’ or ‘a lot’) Afrobarometer

In Namibia and Mozambique levels of trust in opposition parties were found to be at the highest levels ever. But in Zimbabwe trust in the political opposition declined sharply after 2008/2009. Similarly, the proportion of Zimbabweans who said they felt “close to” an opposition party dropped from 45% in 2009 to 19% in 2014.

This dramatic reversal of fortune provides an important lesson for opposition parties in the other four countries. First, the opposition Movement for Democratic Change, led by Morgan Tsvangirai, was unable to leverage its role in stabilising the country when it was part of the Government of National Unity (GNU).

Secondly, infighting and increasing fractionalisation may have further shaped public opinion about its viability as a party.

Take the example of Botswana. The Botswana Democratic Party, in power since independence in 1966, is the region’s most enduring dominant party. It has even adopted the slogan “There is still no alternative”. Although the party has been able to maintain a majority of parliamentary seats, its share of the popular vote declined to 46.7% in 2014, the lowest level of any of the dominant parties in the region.

Afrobarometer’s 2014 survey, which took place a few months before the election, showed that 44% of Batswana agreed that the political opposition presented a viable alternative vision and plan for the country (Table 1, below).

Respondents were asked: Please tell me whether you agree or disagree with the following statement: The political opposition in [your country] presents a viable alternative vision and plan for the country? (Note: This question was not asked in Swaziland.) Afrobarometer

In Botswana’s “winner-takes-all” electoral system, a large part of the opposition’s success in the 2014 election was due to three parties forming a coalition – the Umbrella for Democratic Change (UDC). This reduced vote splitting. A recent decision to expand the coalition to include the country’s remaining major opposition party, the Botswana Congress Party, has led to speculation about the chance of an opposition electoral victory in 2019.

Similarly, in South Africa, the opposition’s strong showing in the 2016 local elections has bolstered its optimism about its prospects in the 2019 national and provincial polls.

This success suggests that confidence in the political opposition may have grown since the 2015 Afrobarometer survey. It could also reflect widespread dissatisfaction with the governing African National Congress and political institutions, leaders and performance on a range of key policy areas.

But public dissatisfaction with government performance doesn’t necessarily translate into perceptions that opposition parties could do a better job, as Figure 2 shows. This is particularly so in South Africa and Zimbabwe. While eight in 10 citizens in the two countries report poor government performance on their top policy priority (unemployment, only 37% say that another political party could solve the problem.

What role should opposition parties play?

monitor and criticise the government in order to hold it accountable.

This is true even among respondents who are opposition party supporters (Figure 3, below). In South Africa there’s even been a decline since 2008/2009 in support for opposition parties playing a “watchdog” role.

Respondents were asked: Which of the following statements is closest to your view? Statement 1: After losing an election, opposition parties should monitor and criticise the government in order to hold it accountable. Statement 2: Once an election is over, opposition parties and politicians should accept defeat and cooperate with the government to help it develop the country. (Percentage who ‘agree’ or ‘agree very strongly’ with Statement 1) Afrobarometer

This suggests that opposition parties might put off potential voters if they are seen to be constantly criticising the ruling party rather than contributing to the country’s development. Opposition parties might do better if they highlight their policy platforms and gain citizen confidence in their plans and capabilities.

This is a crucial insight for opposition parties in the region as it runs counter to the opposition’s conventional role in Western democracies.