The premier said as long as racism and other prejudices persisted in SA, the struggle would continue. 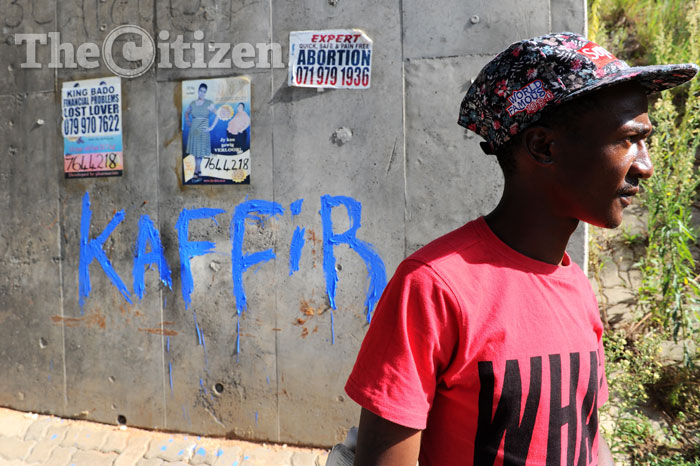 A newspaper vendor is seen walking along a walkway where the word "kaffir" has been painted, underneath the Hendrick Potgieter Road bridge on 14th Avenue in Roodepoort, 13 January 2015. The graffiti is new and the photographer first noticed it on Saturday. Another passerby mentioned he had not noticed the graffiti before either, but was surprised by it. Picture: Michel Bega

Racism, which some South  Africans thought would suddenly disappear post-democracy in 1994, is alive and kicking, as was evident throughout last year.

Starting with Penny Sparrow’s labelling of black beachgoers in Durban as “monkeys” in January 2016, a string of racist incidents proceeded to cause ructions in the country.

Various organisations have pledged to tackle the problem, such as the Anti-Racism Network SA founded by the Nelson Mandela and Ahmed Kathrada Foundations in 2015.

Launching this year’s Anti-racism Week, Gauteng Premier David Makhura also highlighted xenophobia, violence against the lesbian, gay, bisexual, transgender and intersexual community (LGBTI) and sexism as among issues that needed to be tackled.

“You can change the laws, we have a beautiful constitution, we have institutions, but racism persists together with many other prejudices and practices that undermine the notion of freedom,” Makhura said at the Nelson Mandela Foundation on Wednesday, which was also International Women’s Day.

The persistence of prejudice had detracted from the emergence of a democratic society, he added.

“Racism is one in the family of problems we must combat. Another is violence against women and children. And the problem of xenophobia had to be confronted,” said Makhura.

“We know that our forebears would be turning in their graves to think that in the country for which they sacrificed everything we have the depth and level of xenophobia we do have.

“If you go anywhere on the continent and introduce yourself as being from South Africa, the first thing they say is ‘oh, you guys are very xenophobic. What is happening in your country?’”

The LGBTI community faced both discrimination and violence,   with people being killed for being themselves, he pointed out.

As long as racism persisted, along with the other prejudices, “the struggle continues”.

“Once you have someone saying to you ‘I am not racist, but…’ then you know there is a problem.”

Although South Africa had democratic elections and a sterling constitution since 1994, it was not constructive to deny these problems existed. Therefore, the Anti-Racism Network came at the right time, Makhura added.

This year’s anti-racism campaign will focus on the idea of “becoming” a champion against racism, said Anti-Racism Network convenor Sean Moodley.

“This could include everything from pledging to tackle one’s own racist notions, to challenging dinner table racism, or becoming a community activist against discrimination,” he said. “What the theme allows for, is both personal introspection and the challenging of attitudes, as well as critical discussion and ideas on how to capacitate people to deal with structural and institutional racism.”

The daily themes for the week include: Be Aware, Be Frank, Be Challenged, Be Conscious, Be Brave, Be Just, Be Free and Become.