The famed cartoonist has once again caused a stir with his latest rape cartoon involving President Jacob Zuma. 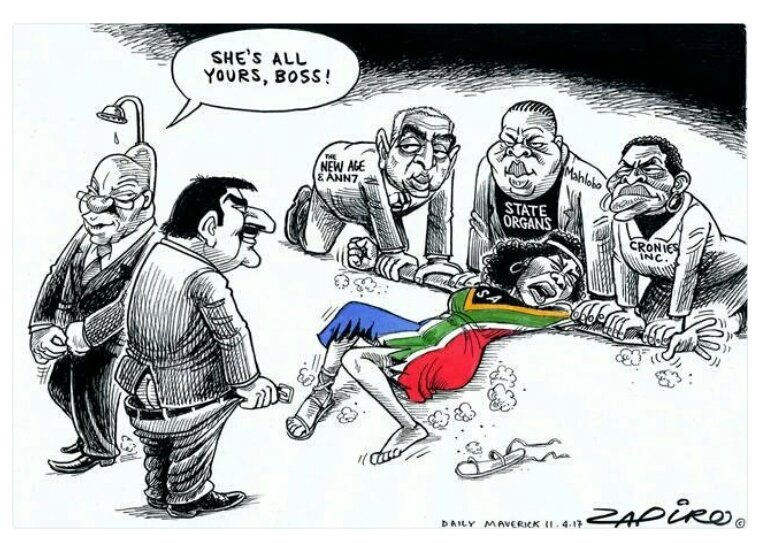 Renowned cartoonist Zapiro has once again stirred controversy with his latest cartoon. The cartoonist published a cartoon for the Daily Maverick on Tuesday titled “She’s all yours, Boss”.

In the cartoon, President Jacob Zuma is seen zipping his trousers while one of the controversial Gupta brothers takes down his pants, seemingly getting ready to “rape” a woman representing South Africa.

South Africa, meanwhile, is being pinned down by a representative from the Gupta-owned New Age and ANN7, State Security Minister David Mahlobo as well as Social Development Minister Bathabile Dlamini, representing Zuma’s cronies.

Zapiro has reacted to the artwork, saying he wanted to “shock” but also generate empathy for the person being raped, in this instance SA.

The controversial cartoon has caused quite a stir on Twitter, with some users praising Zapiro’s clever use of satire and the harsh measures used to depict the reality facing the country today.

Other users, meanwhile, slammed the cartoon as being offensive and having racist connotations.

See a few of the reactions to his latest work below.

I am 100% black and don't believe that #Zapiro is a racist, i paid more attention during English classes and understand what satire is

Just saw the cartoon and thread now. Why are we joking about rape? I know art is supposed to disturb but this really isn't funny. #Zapiro

#Zapiro depicting our country being raped is a terrible image. Should not be depicted as such….it is however the truth.

#Zapiro this is no freedom of speech ???? pic.twitter.com/A0jjQ4SuZ8

#Mogoeng :If a #leader is #unethical, everyone becomes a coparticipant in the unashamed betrayal of the cherished #constitution. #Zapiro

Satire
use of humour, irony, exaggeration or ridicule 2 xpose & criticize peoples stupidity, particularly in the context of politics #Zapiro