The anti-Zuma march in Polokwane will be joined by opposition parties, including the EFF, UDM, and Cope. 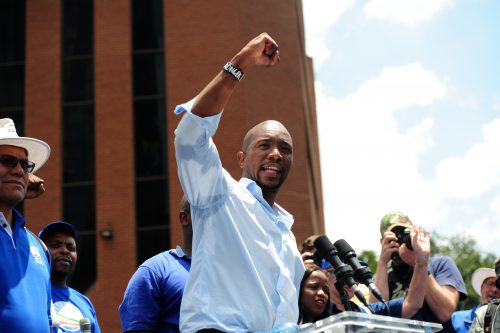 The “nearly bankrupt” Limpopo province’s woes will be highlighted today as opposition parties are expected to march to the provincial treasury in Polokwane.

Democratic Alliance leader Mmusi Maimane, along with the Economic Freedom Fighters, United Democratic Movement and Congress of the people, will lead a “march against state capture” following a damning auditor-general’s report this month in which the province failed to receive a single clean 2015-16 audit.

In a statement on Monday, the DA said there was no better case study for government corruption than Limpopo.

“Jacob Zuma and the ANC have normalised the abuse of the people’s money and institutions for self-benefit, while neglecting their duty to create jobs and build a better South Africa,” it said.

Auditor-General Kimi Makwetu said Limpopo’s financial health “left much to be desired” after it went from receiving 4% clean audits in the 2014-15 financial year to none.

The report indicated that poor leadership and governance had affected government-owned entities’ operations and audit outcomes.

It also indicated that Limpopo, North West and the Free State obtained the least number of clean audits in their provincial government departments and entities.

Education and health were the worst-performing departments in the province, which Makwetu described as baffling, given that the two departments accounted for 76% of the provincial budget.

No stranger to allegations of mass scale corruption and debt, the province was put under national administration in 2011 after it went bankrupt under the rule of then premier Cassel Mathale.

Then, it failed to account for more than R150 million in contracts which the department of education allegedly awarded to state officials.

Makwetu’s latest report indicated that six of the province’s municipalities were on the verge of financial collapse – Vhembe, Mopani, Sekhukhune, Belabela, Musina and Lim 345.

BLSA calls on Zuma to step down, urges citizens to stand up against ‘state capture’

ANC using social grants to 'blackmail poor people' to vote for them, claims Zille
22 hours ago
22 hours ago

ANC using social grants to 'blackmail poor people' to vote for them, claims Zille
22 hours ago
22 hours ago