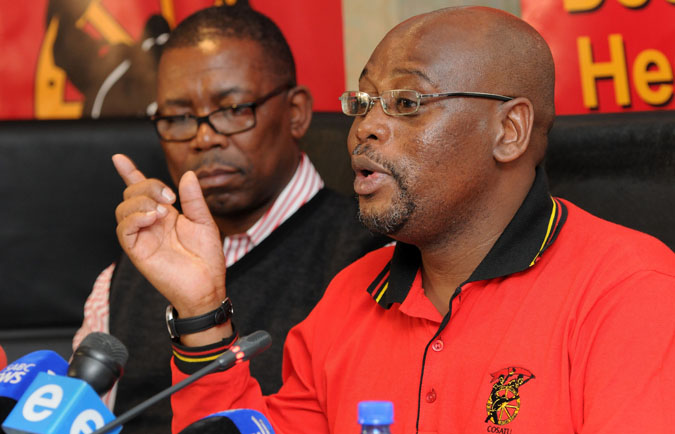 National Education, Health and Allied Workers Union (Nehawu) spokesperson Khaya Xaba has told the Citizen that he can not confirm this morning’s report that his union is against Zuma attending Cosatu central committee scheduled from May 29th to June 1 in Centurion, Tshwane.

In today’s Star, Xaba is quoted saying “that man (Zuma) must not even think about coming to the CC. The man must resign, and him coming to address the CC would be a way of dividing us. Look at how the May Day was divided, it’s because of him”.

The report also stated that some Cosatu affiliates led by Nehawu, the federation’s largest affiliate, have warned the ANC not deploy President Zuma to address or attend  the federation’s mid-term meeting where items such as policy and organisational progress will be tabled.

When contacted Xaba was non-committal on whether Nehawu continues to lead calls against Zuma delivering keynote speech during the gathering’s opening day. “I have been getting calls about that but you must understand this is a political issue and I must first consult leadership”, he told Citizen

Media curiosity follows last week’s confirmation that both Nehawu and Communications Workers Union (CWU) wrote to Cosatu leadership asking them to bar Zuma from addressing May Day rally in Bloemfontein. The event descended into chaos when pro- and anti-Zuma supporters out-sang each other. Eventually all speeches  and the event were cancelled and Zuma didn’t address workers.

CWU general secretary Aubrey Tshabalala clarified the issues surrounding the keynote speaker at CC. “There was a plenary to discuss the programme for the event, including the opening, a while ago. During that meeting it was approved that both President Zuma and Deputy President Ramaphosa will deliver speeches to the CC. But bear in mind it was a while ago when it happened”.

The issue for the Cosatu and its affiliates to reflect on now, he says, is whether they “should proceed with this decision and allow the president to speak considering what happened in Bloem”.

“I heard this rumour on social media and nothing has been presented to us. I have seen the video clip where the president said workers love Zuma. I dont think workers hate Zuma. The issue here is that leadership had pronounced its position that he must step down to save the country”. He says for now CWU is treating the calls for motion of no confidence against Cosatu president as a rumour

“It may also be a ploy to divide workers movement in this country”, he confided to the Citizen.

Ronnie Mamoepa, spokesperson for the Deputy President Cyril Ramaphosa, was also slightly pertubed when asked whether Ramaphosa is aware that Cosatu affiliates prefer him over Zuma.

“That is not government business. If or when we receive an invitation for him to speak at CC we can then engage the media. For now we are as much in the dark as you are about the keynote speaker”.