MPs are deployed to parliament by their parties – Ramaphosa

There’s not a single MP who came to the legislature on a constituency system, says Ramaphosa. 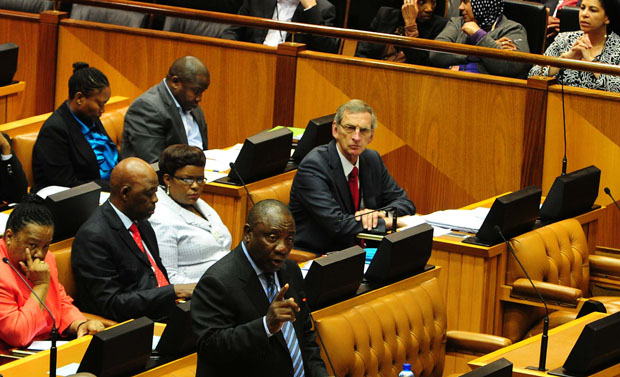 As the UDM and EFF gear up for their Constitutional Court challenge next week to compel parliament to conduct a motion of no confidence in President Jacob Zuma by way of a secret ballot, Deputy President Cyril Ramaphosa said MPs were deployed to the national legislature on a party ticket.

Answering MPs oral questions in the National Assembly since Zuma’s controversial midnight Cabinet reshuffle in March, the deputy president said appeals for ANC MPs to vote with their conscience in the pending motion tabled by the Democratic Alliance (DA), would be playing to the gallery.

“With a matter like this it’s quiet easy to play to the gallery, and I think we should enter this debate in a very sober manner because we are all here on the basis of political party mandates, that’s what brought us all here,” he said in response to a followup question from DA leader Mmusi Maimane.

Ramaphosa defended the country’s parliamentary system based on proportional representation, saying the current electoral system had played an important role in ensuring parliament was representative and inclusive.

“There’s no a single person who came here, from the president right down to the last member of parliament, on the basis of a constituency system, and in fact it gets worse because this party system plays itself in particular ways. Some parties even have in their constitutions that you may not violate your party position,” he said.

“When you combine individual and party conscience, I don’t know which one is best,” Ramaphosa added, saying the country needed to discuss and debate its electoral laws instead.

The ConCourt will hear oral arguments in the secret ballot case on Monday.

The Council for the Advancement of the South African Constitution, the Unemployed People’s Movement, the Institute for Security Studies and the Shosholoza Progressive Party have also joined the case.

We will not protect any ANC leader accused of corruption, says Ramaphosa
6 hours ago
6 hours ago
PREMIUM!

We will not protect any ANC leader accused of corruption, says Ramaphosa
6 hours ago
6 hours ago
PREMIUM!