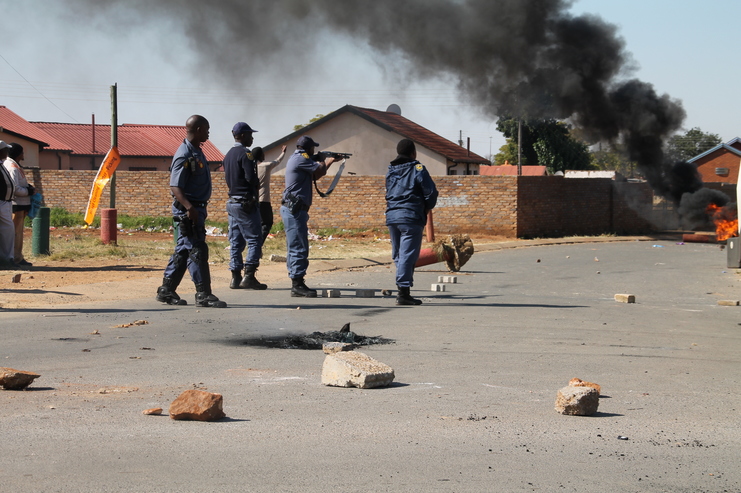 The situation is tense in Toekomsrus on Monday and various role players are interacting with the residents. Picture: Randfontein Herald

The 32 people arrested in connection with the hostage drama involving the mayor of Ditsobotla District Municipality, Daniel Buthelezi, are expected to appear in court soon, the police in North West said yesterday.

Buthelezi was held hostage for about eight hours by a group of angry residents demanding quicker service delivery.

The irate group also petrol-bombed a section of the municipality building.

Police spokesperson Brigadier Sabata Mokgwabone said of the 32 who were arrested, nine were women.

He said the ages of the suspects ranged between 24 and 52.

Speaking on behalf of the provincial government, Brian Setswambung said the drama that unfolded at the municipality in question was worrying.

“We want to condemn those incidents in the strongest possible terms because violence has never and will never solve problems.

“We must still establish the real facts about what led to the violence there because the information we have been able to gather so far has been through media reports,” he said.

Setswambung said the premier recently appointed a task team, consisting of five MECs, to look into the grievances raised by residents from Itsoseng, Coligny and Blydeville pertaining to service delivery.

In a separate protest, which took place in Roodepoort, Gauteng, several passengers had to be rushed to hospital on Wednesday after the bus they were travelling in was petrol-bombed.

According to spokesperson for the Joburg metro police Superintendent Wayne Minnaar, parts of Albertina Sisulu Road remained closed. He stressed that the area was still tense.

The City of Joburg said three of its Metrobus vehicles were damaged by protesters outside the Princess Crossing shopping centre.

This week, Gauteng police had their hands full in trying to restore calm in different parts of Ekurhuleni and, as the week progressed, residents in Diepkloof, Soweto, also took to the streets demanding improved service delivery.

Karen Heese, economist at Municipal IQ, said the past few weeks had been remarkable in Gauteng, with protests spreading rapidly between communities, particularly in the south of Johannesburg.

She said that from the middle of this month, two out of every five service delivery protests had happened in Gauteng, which was an increase of almost 50% compared with the years from 2004 to this year.