Bafana legends help in the rehabilitation of offenders. 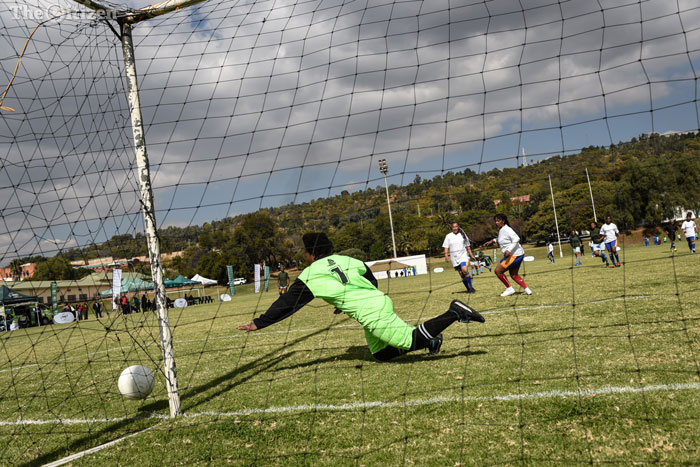 Goal keeper for Johannesburg Female Prison deflects a goal attempt from an inmate from Kgosi Mampuru Prison during a match between the two woman teams at the launch of the Gauteng Offender Soccer Development League at the Kgosi Mampuru Correctional Services sport grounds, 30 May 2017, Pretoria. Picture: Jacques Nelles

“We started in Gauteng with small numbers. There are about eight teams in the league and offenders will be competing against each other. They are not just going to kick the ball around.

Former Bafana Bafana players Edward Motale and Helman Mkhalele said when they were approached by the department they jumped at the opportunity because it was their way of giving back to the community.

However, offenders who had committed serious and violent crimes would not be allowed to play soccer outside the correctional facility.

“If they are doing their exercises and sport, it will be inside the facility,” Smalberger said.

Smalberger said the offenders taking part in soccer matches yesterday during the launch had already proved they were complying with all the conditions of the correctional facility and deserved to be here.

“In a correctional facility you need to work almost on a basis of characteristic principle. You need to give those who are behaving some sort of privileges, more than the others, so that they can change their lives and be fully rehabilitated before you release them,” Smalberger said.

Motale said because he and Mkhalele both played at the highest level, this had given them the opportunity to share their experience and knowledge of the game.

“Most importantly was to reform and rehabilitate inmates, to keep them active and create positive thinking.

“When they go home, they will become better people, better parents, better fathers, better uncles, and not come back here again.”

Mkhalele said he had always had a burning desire to help offenders.

“I felt it is important for me to help and play a meaningful role in terms of exchanging knowledge with the prisoners.

“One day, when they go out of this environment, they must be able to have hope, confidence and skills to go out there and play a meaningful role in society to ensure that our country is stable, safe and develops economically.”

Smalberger said that, besides soccer, they had a variety of rehabilitation programmes, which included formal education and skills development.

“These are programmes that are correcting offender behaviour. We also have psychologists and social workers, to name a few.”

Smalberger said sport did not stand alone as a programme but went together with arts and culture.

“Sport forms a very important role for the offenders.

“It is not only about the opportunity to play sport, but must be seen in addition to the other programmes they are attending,” he said.