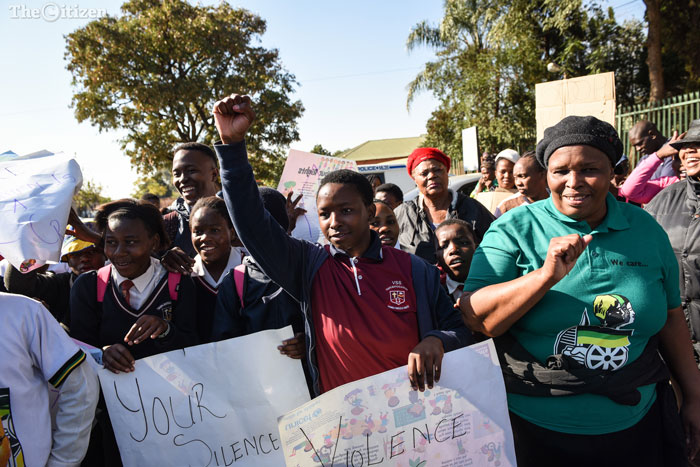 ANCWL members and local residents march in protest against woman abuse from outside the Mamelodi Magistrates Court to the Police Station, the march was held in support of the victim and family of Lindiwe Sangweni who last Wednesday was allegedly bludgeoned to death by her boyfriend, Phenius Mampane who was appearing in court, 2 June 2017, Pretoria. Picture: Jacques Nelles

Vlakfontein High School pupils and members of the African National Congress Women’s League stood in solidarity yesterday outside the Mamelodi Magistrate’s Court in support of the family of Eva Lindiwe Sangweni, who was allegedly hacked to death with a machete in front of her four-year old daughter.

The 35-year-old mother was allegedly killed in cold blood by her former boyfriend just three weeks after she obtained a protection order from the Mamelodi Magistrate’s Court.

The man was ordered then “not to threaten, assault or harass the applicant or her children, Xolani, 12, or Zinlle, 4”.

But on May 25, the man allegedly slipped into her house, hid in the toilet and waited for her to return home.

As she and her daughter walked into the house, he quickly closed the door and attacked her with the machete until she died.

He appeared in court yesterday on a charge of murder but was not asked to plead. He was denied bail.

Sangweni’s uncle, Thulani Khumalo, told Saturday Citizen the man cut his niece’s stomach open, pulled out her intestines and threw them over her daughter.

By then, a neighbour had called the police and alerted the community by blowing a whistle.

Khumalo said that when police arrived, the alleged murderer still had the machete in his hand and he only surrendered it to police after one of the officers pulled his gun on him.

He said they would start counselling after the funeral, which is today.

ANCWL regional secretary of the greater Tshwane, Aphina Gogo Ndlovana, who led the protest and march from the court to the Mamelodi West police station, said police must take women and the issues of women seriously.

The case was postponed to June 21.

IN PICTURES: ANCWL march in support of Lindiwe Sangweni’s family