Cellphone network coverage was badly affected, and efforts are under way to restore it. 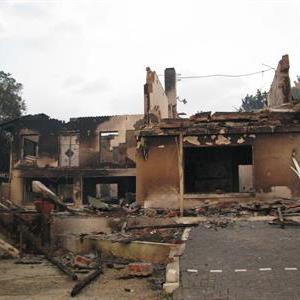 Remnants of the devastation caused by the raging Knysna fires.

South African cellphone giants MTN and Vodacom have confirmed that following interruptions in service to the Knysna area during the massive fire that broke out earlier this week, services have been restored.

Vodacom confirmed there had been damage on its network following the raging fires engulfing the towns of Knysna, Plettenberg Bay and Sedgefield in the Southern Cape.

MTN also informed The Citizen it had successfully restored connectivity to large parts of Knysna.

“The runaway fires damaged fibre networks, infrastructure and communication equipment. As a result our engineers are rerouting the traffic to enable residents to have access to voice and data services and facilitate access between residents and the disaster management team,” says Giovanni Chiarelli, the chief technology and information officer of MTN SA.

“We suspect that there are network sites that have been totally destroyed. We have not been able to confirm this, as we cannot gain access to the affected areas yet. We will be bringing in portable network sites to assist in some of the areas worst affected, should it be necessary,” according to Byron Brown, the Vodacom head of media relations.

Meanwhile, the fire has destroyed about 900 hectares of land and about 400 properties. In order to minimise further damage, Working on Fire firefighters have been roped in to distinguish the fire.

The South African Defence Force (SANDF) continues to water-bomb affected areas. The Elandskraal and Phezula areas of the town are experiencing intense runaway fires compared to other areas.