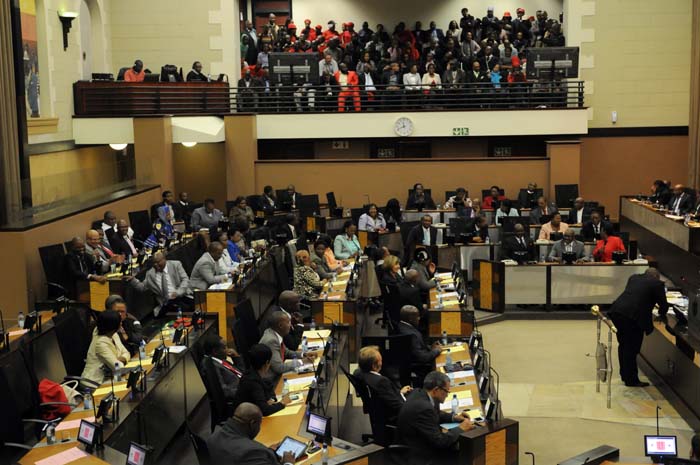 FILE PICTURE: The new Gauteng Legislature members taking the Oath of the office during the swearing in of members in Selbourne Hall, Johannesburg, 21 May 2014. Picture: Nigel Sibanda

R341 million has been wasted on a building constructed for the Gauteng provincial archives in Kagiso Extension 6 in Krugersdorp, which has been empty for three years, according to the DA.

Paul Willemburg, Democratic Alliance Member of the Provincial Legislature, said construction of the archives began in early 2014 and it was set to open its doors in February 2016. The predicted cost was R312 million.

“Cost have now escalated to an approximate R341 million.

“This is excluding the cost for 24 skilled staff, servers, ICT/ broadband, equipment for archive preservation and furniture,” Willemburg said.

He added that according to the Gauteng standing committee on public accounts (Scopa) report on the archives, the contractors have downed tools without having completed the project.

The building would play a key role in heritage preservation.

“Our visit to the archives and engagements with members of the Kagiso community revealed that many residents were not aware of what exactly the monumental building was.

“It has stood empty for almost three years and according to the department it will open its doors at the end of June this year,” he said. Willemburg said the DA would hold the MEC accountable in this regard.

“Contractual disputes, poor workmanship and architectural design issues were blamed for the delay,” he added.

Willemburg said the lack of coordination between the provincial departments had resulted in yet another empty shell. Gauteng residents could not afford any more wasteful expenditure by the ANC provincial administration.

He said the Kagiso library, which is right next to the archives building, was another empty shell. Construction of the library started in 2013.

However, it has been empty for the past two years.

The contractor who is responsible for the archives building also built the library and the workmanship was poor, Willemburg said.

The spokesperson for the department could not be reached.

Zille accused of ‘pressurising’ officials to ‘boost’ her son’s business