Mark Zinde started swearing loudly and showed the middle finger after his brief appearance in court. 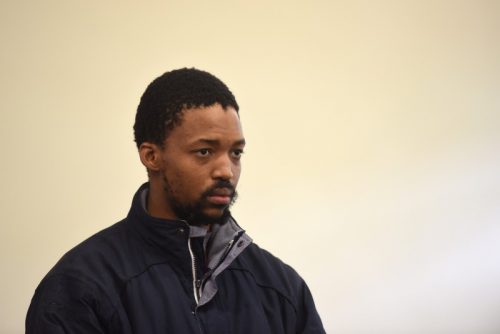 Murder accused Mark Warona Zinde stands in the dock of the Brits Magistrate's court, 13 June 2016, during his first court appearance for the alleged murder of his mother, broadcaster Hope Zinde. Picture: Refilwe Modise

Mark Zinde, accused of murdering his mother, former SABC board member Hope Zinde, yesterday started swearing loudly and showed the middle finger after his brief appearance in the High Court in Pretoria.

“F*#c you, funny f*#kheads. Where’s that b*tch?” Zinde said just before he was led down to the court cells. Zinde’s trial was postponed to Thursday for a formal application by his attorney, Francois Joubert, for a second referral to Weskoppies Psychiatric Hospital in Pretoria for mental observation.

The further observation is connected to an alleged attack on his father, Lebohang Manote, and stepmother Mamasedi Maleka at their Walkerville home in Vereeniging on November 6 last year while Zinde was out on bail.

Zinde was living with his father after being granted bail.

The state alleges he had attacked his father with a drinking glass in the face and tried to strangle him.

When his stepmother tried to stop him by biting and hitting him with a curtain rod, he allegedly hit her and pushed her away before the couple managed to overpower him.

His father sustained serious injuries as a result of the alleged assault. Additional charges of attempted murder and assault were added to the charge sheet after the attack. Zinde is also facing charges of murdering his 50-year-old mother, Hope, at their house in Pecanwood Estate near Brits in June last year by assaulting her and of the illegal possession of methamphetamine.

The former journalist and television news anchor’s body was found stuffed into the boot of her Range Rover at her home on June 11 after family members became worried about her when they could not contact her. The state alleges Zinde initially refused the Pecanwood security staff access to his mother’s house, whereafter they phoned the police for assistance.

When security staff finally allowed family members inside the estate, he allegedly refused them entry into the house, and told them his mother was not there.

When the police arrived, they found his mother’s body in the boot of her car in the garage. She had died of head injuries.

Zinde was previously referred for mental observation, but a panel of experts declared him fit to stand trial, and stated he did not suffer from any mental disorder when he allegedly killed his mother.

In January, Joubert unsuccessfully applied in the Brits Magistrates’ Court to have his client readmitted to Weskoppies for a computed tomography (CAT) scan of his brain and an electroencephalogram (EEG).

He told the court the defence had appointed a private psychiatrist, Dr John Weinkove, who said in a report he believed Zinde suffered from schizophrenia with predominantly negative features.

Zinde will remain in custody.