Panayiotou is accused of paying a bouncer from his Infinity nightclub to hire Sizwe Vumazonke to kidnap and kill his wife. 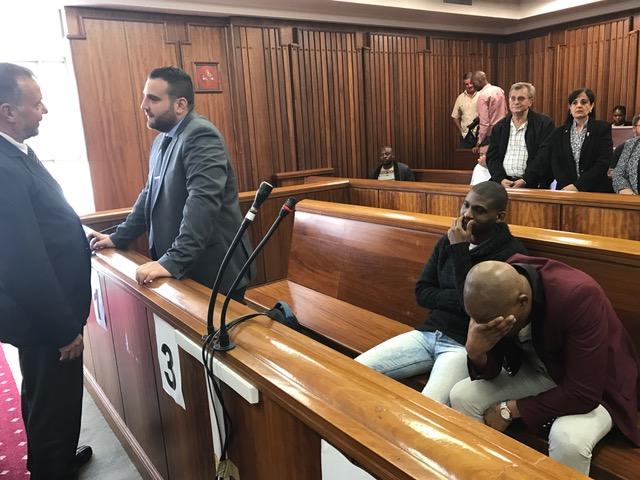 The prosecution on Tuesday finally closed its case in the mammoth murder trial against Christopher Panayiotou and his two co-accused, which has been running in the Port Elizabeth High Court.

It was earlier expected that the state would call investigating officer Captain Kanna Swanepoel to the stand. However, in a surprise move that did not materialise, Warrant Officer Shane Bosc from the police’s organised crime unit, was called as the state’s final witness.

Bosch was responsible for the arrest of Zolani Sibeko during July 2016.

Under cross examination, attorney Peter Daubermann referred to Sibeko’s arrest at his parental home in Greenbushes.

Bosch told the court that when he arrested Sibeko in connection with Jayde Panayiotou’s murder, the young man “appeared shocked”.

Bosch said that he had informed Sibeko of his rights, including his right to an attorney, but he did not respond.

However, Daubermann was adamant that Bosch did not give Sibeko the opportunity to contact a lawyer.

“I informed him of his right to an attorney. I was arresting him for a serious charge, and I assume if he wanted one he would say something,” said Bosch.

Bosch told the court that after arresting Sibeko he handed him over to Swanepoel and proceeded to search for his cellphone in a bedroom.

He said that an elderly lady in room turned around and flashed open her nightgown, saying she had “nothing to hide”.

But Bosch then saw a cellphone light flash, and the woman was asked to produce the phone.

Daubermann further placed a map before court that showed how Sibeko would have to travel down Cape Road, past Jayde’s residence, to get to his home in Greenbushes.

Cellphone plotting earlier placed before court showed how Sibeko was in the vicinity of Jayde’s home in the days before her kidnapping and murder.

The schoolteacher was abducted while waiting for a lift to work and subsequently murdered on the outskirts of Kwanobhule during April 2015.

Businessman Christopher Panayiotou is accused of paying Luthando Siyoni, a bouncer from his Infinity nightclub, to hire Sizwe Vumazonke to kidnap and kill Jayde.

The state alleges that Sinethemba Nenembe assisted Vumazonke to kidnap and murder the teacher at the behest of her husband. Vumazonke has since died.

The case was postponed until Thursday.