Many have not been able to take their children to school or find work and have been relying on infrequent food handouts to survive. 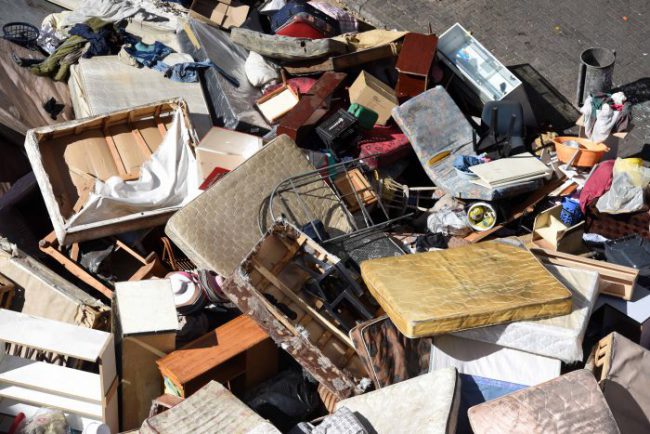 Residents' property on the street after Red Ants evicted a large number of residents from a derelict building on the corner of Harrison and Jeppe streets in the Johannesburg CBD, 19 July 2017. Picture: Neil McCartney

More than 200 people rendered homeless by evictions from inner-city buildings have been languishing hungry and in the cold at a camp site in Turffontein, some for over two weeks.

The latest group evicted from Fattis Mansion in the Johannesburg CBD last week were promised they would not spend more than three days in the tents but have begun to lose hope and are calling on government to provide them with housing and food.

Cut off from their usual access to casual work and basic services in the inner city, many have not been able to take their children to school or find work and have been relying on infrequent food handouts to survive.

The campsite resembled a Third World refugee camp as scores of children played around a pile of mostly broken furniture, a grim shrine to the life they had before they were unceremoniously ripped from their homes.

“I just wait and pray every day that things will get better,” said Johannes Mpela, a father of three whose family has been living in the campsite since last Friday.

“My wife gets a lift to town to work. She is the only one with transport to go to work.

“They give us some old buns and water, but it’s better than nothing.

“It is very cold here at night. All I ask is that government gives us a proper home. We were paying R500 for rent at Fattis. I cannot find another place like that.”

Mpela, who relied on casual work as a builder, was robbed of his last R800, his cellphone and ID when Red Ants raided his home last week.

He and many others were completely cut off as they had neither the transport nor money to go anywhere else nor the communication lines to call for help.

City of Johannesburg spokesperson Tony Taverna-Turisan told The Citizen that while the city was responsible for providing emergency housing and services for people rendered homeless by evictions, the housing crisis in the inner city needed co-operation from provincial and national government. – simnikiweh@citizen.co.za