College and university fees to fall next year, says Mantashe

The ANC SG says financial assistance of up to R150k will be converted from loans to grants for poor students. 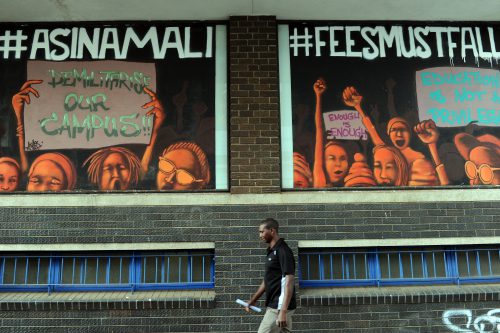 A pedestrian walks past street art in Braamfontein, on the side of the building that houses the Stevenson Gallery, 20 January 2016. The art reads "#asinamali", "demilitarise our campus!!", "#feesmustfall", "enough is enough" and "education is not a privilege". Picture: Michel Bega

The party held its national executive committee lekgotla over the weekend.

“Being cognisant that the Heher Commission has until 31 August 2017 to submit its report on the feasibility of fee free higher education and training, the NEC Lekgotla resolved to introduce the following measures that should be integrated into the final work of the Commission,” Mantashe told reporters in Johannesburg.

”The proposal should be factored in over time but be effective from the January 2018 intake of students. The reason for the phasing in is to allow time and space for government to prepare and budget for it over the long term.”

A combination of grants would kickstart the plan, with financial assistance of up to R150 000 be converted into a grant.

“Fully subsidised grants should be provided to academically qualifying poor students. Poor students are defined as coming from families who earn a gross family income of R150,000 and below per annum should be subsidised through a combination of grants and income contingent affordable loans, with their families providing a household contribution to their studies in proportion to their ability to pay,” he said.

When asked whether the decision was meant to prevent another ‘FeesMustFall’ shutdown at universities colleges, Mantashe said the ANC had taken a resolution to provide free higher education to poor students at its previous elective conferences.

”The intention is to provide free education in a sustainable way to the children from poor households of the working class…that is the intention. This is a long standing resolution on which we made a lot of promises, we are taking a step forward now that we will pilot it and phase it in from 2018.”

Several campuses around the country have experienced violence and unrest since in 2015 and last year as students took to the streets demanding free tertiary education.

The protests escalated last year when Higher Education Minister Blade Nzimande’s announcement in September last year that universities should decide on their own fee increase for the 2017 academic year.