Fairland police opened fire on two of four suspects who allegedly pulled weapons on them after fleeing in a suspicious-looking white VW Polo on Beyers Naudé Drive in Cresta on Tuesday, reports the Randburg Sun.

According to Captain Walter Spencer of Linden Police Station, officers from Fairland Police Station noticed a suspicious vehicle on the road while driving, and when they put their sirens on, two of the four occupants exited the vehicle and made a dash.

They ran between a car dealership and Cresta shopping centre while the other two suspects made a stand and allegedly pointed firearms at the officers. The officers opened fire on the two, injuring one suspect in his legs. The other was tackled to the ground and sustained a head injury.

It is unclear what charges the other two suspects would face.

Constable Moloko Kgatla, spokesperson for Fairland Police Station, said none of the officers involved in the shooting were injured.

While the incident took place near Cresta Shopping Centre, Elena Yiallouris, Cresta marketing manager, confirmed the incident did not take place on its premises. However, Spencer added Cresta security personnel assisted police in catching two of the suspects.

Although the incident took place in the Linden Police Station jurisdiction, it will be investigated by Fairland police. 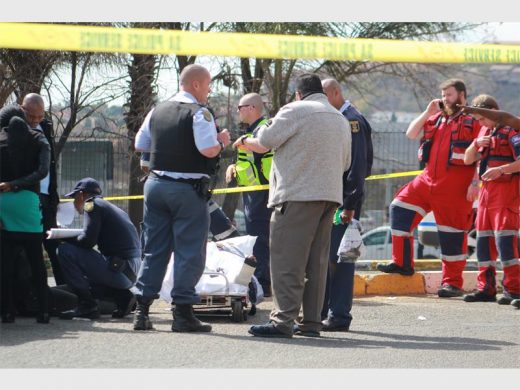 Police talk about the shooting while on the scene just outside Cresta shopping centre. Picture: Randburg Sun

Two robbery suspects were shot and wounded by police outside a shopping centre in the Cresta area on Tuesday, reports the Randburg Sun. The area is cordoned off by authorities. Picture: Randburg Sun

Further details are unclear at this stage.