The defence argues that dagga is no more dangerous than skydiving and alcohol. 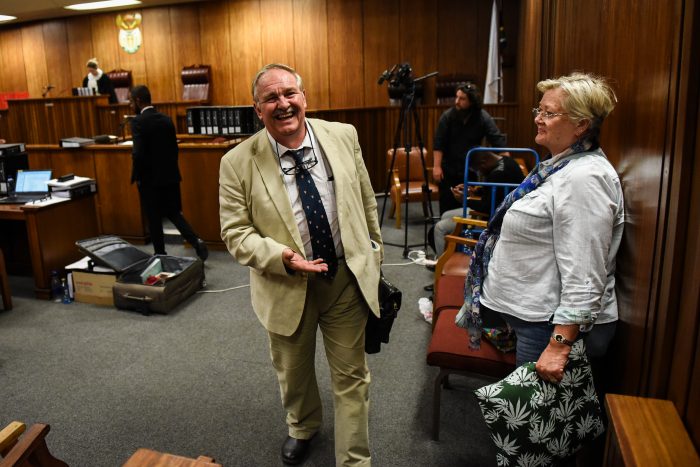 Proffesor David Nutt is seen leaving the court room after his time on the stand as the defences expert witness during the dagga trial, 3 August 2017, at the North Gauteng High Court in Pretoria. Picture: Jacques Nelles

Cigarettes, alcohol and skydiving should be criminalised as they are also harmful – and certain harms justify the criminalisation of marijuana.

These were some of the opening remarks by defence attorney Don Mahon, in the High Court in Pretoria yesterday during the “trial of the plant”.

Mahon said his clients, Julian Stobbs and Myrtle Clarke, known as the “dagga couple”, challenged the legislation that prohibits possession and use of marijuana as inconsistent with the constitution.

The couple were arrested in 2010 for possession and dealing in marijuana but have brought the case before the court, claiming their arrest was unconstitutional.

Mahon argued the harmful effects of the plant and the extent of damage caused by the illegal substance should be weighed.

“If strong evidence proves it causes schizophrenia in nine out of 10 people, it is a problem. But if it is one in 5 000, the extent of harm should be weighed up. This was never considered at the time of the criminalisation,” he said.

“The existence of the harm does not justify criminalisation. Cigarettes, alcohol, skydiving and pornography should then be criminalised as there are also harms associated with them.”

The trial started following a three-day delay by the state – which represented seven government departments, and Doctors for Life, the eighth defendant – which had submitted applications against summaries of evidence by expert witnesses.

But Judge Natvarlal Ranchod dismissed the application, stating reasons would be given at the end of the trial.

The first expert witness for the defence, Professor David Nutt, a British psychiatrist and neuropsychopharmacologist, gave evidence on the harmful effects of drug use.

“It is difficult to get to the core truth of what drugs do. Drugs are illegal and, therefore, research is limited, so we have poor evidence to use. It is easy for people to say there is not enough research to make it legal, but it is hard.”

But state advocate Tom Bokaba said the dagga couple were hasty in bringing the case before court, as parliament was currently reviewing the Medical Innovations Bill, which looks at medicinal use and legalisation of marijuana. – rorisangk@citizen.co.za