'We already have Mpumalanga, Kwazulu-Natal, North West, and more than half of the Eastern Cape is on our side,' says ANCWL deputy president. 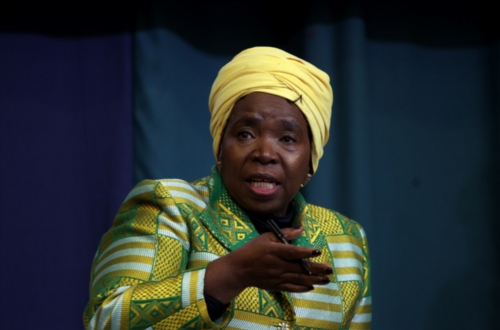 ANC presidential hopeful Nkosazana Dlamini-Zuma has admitted that the party needs to “go back to the drawing board and start to reconnect with the people who elected us into power” if it is to win the 2019 election.

On the campaign trail in Limpopo province, Dlamini-Zuma said: “The ANC has no option but to win the 2019 elections.” She added: “The ANC is the only political party able and capable of eradicating poverty, unemployment, bridging the gap between the rich and the poor and transforming the economy of our country.”

The NDZ17 campaign has strong backing from the ANC’s Women’s League and the organisation’s youth league.

Dlamini-Zuma was accompanied by member of the ANC NEC Pule Mabe, ANC Women’s League deputy president Serofa Ntombela and representatives from all structures of the ANC, including the SACP and the ANC Youth League.

Speaking at one of the campaign gatherings in Giyani, Ntombela claimed the writing was on the wall that Dlamini-Zuma has already won the conference.

“We already have Mpumalanga, Kwazulu-Natal, North West, and more than half of the Eastern Cape is on our side. All these provinces are bringing in more than 700 delegates,” she said to the jubilant crowd, consisting mainly of women.

“They can take Northern Cape and we will not move. They have already claimed that they have Limpopo but we will see that at the conference,” she said to thunderous applause.

Limpopo has five regions – Peter Mokaba, Waterberg, Sekhukhune, Vhembe and Mopani. Dlamini-Zuma’s rival, Deputy President Cyril Ramaphosa, already has the support of Vhembe, where he has ancestral roots, and Sekhukhune, while Dlamini-Zuma has won the Mopani region, the biggest in terms of membership.

But last month, women from Venda surprised many when they gave their support to Ramaphosa during a Worker’s Day rally in Seshego.

In her campaign speech in Giyani, Dlamini-Zuma appealed for a peaceful December conference and added: “We are pleading with those who are going to be nominated at the branch general meetings to elect correctly. They must elect people who would not only unite the party but also make sure that the ANC wins the general elections in 2019.”

She said the party would pursue the policy of radical economic transformation, a resolution of the ANC conference in 2012.

“We must invest in people, in land and in infrastructure. We need to invest in people, give them the necessary skills and education so that they can be employable and participate in the mainstream economy,” she said.