The explosive book has been flying off the shelves, and has hit the Amazon bestseller list worldwide. 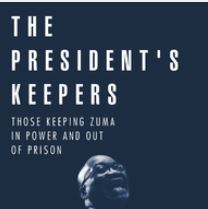 The President's Keepers by Jacques Pauw.

On Facebook, the author of President’s Keepers, Jacques Pauw, wrote that anyone in possession of the free PDF copies of his book that have been circulating through social networks had several options.

He said he had received requests from people who had the PDF versions and wanted to pay him for the copies. Instead of accepting payment, Pauw said he would rather readers buy the Kindle version on Amazon or buy a hard-copy version of the book.

“If you have a PDF copy and can afford to buy a book, please do it. Erase the PDF and buy a book or the kindle version.

“If you cannot afford a book, go for it and read it. You have my blessing. This is not about money. It is about your support that is going to enable us to legally lock horns with Sars, the State Security Agency and whoever else drags us to court,” he said.

Pauw added he was gearing up for a legal challenge, as the state agencies and law enforcement organisations, which include Sars, South African Security Agency and the police, would seek to remove the book from shelves through a court order.

Pauw had named several officials from the organisations in his explosive book and detailed how some were forced out through internal disciplinary hearings, secret meetings and smear campaigns, which later became public through the media.

Despite this, Pauw and his publishers would continue printing books, with Exclusive Books ordering another 15 000.

Pauw’s new book is in the public interest