The spy agency has given the author two days to pull his explosive book off the shelves or face legal action. Investigative journalist and author Jacques Pauw – the author of The President’s Keepers – has revealed the State Security Agency (SSA) has issued him with another “cease and desist” letter to remove his controversial book about President Jacob Zuma’s alleged tax evasion and dodgy dealings with gangsters from the shelves.

Pauw made the revelation on Wednesday night during his book launch at Hyde Park Corner in Johannesburg. He said the SSA had given him two days to withdraw the book or face legal action. 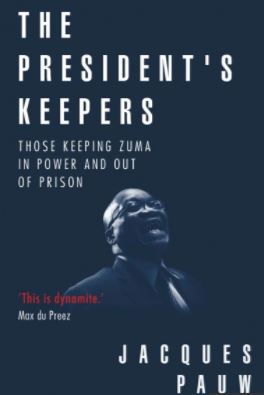 The President’s Keepers by Jacques Pauw.

The SSA argued the book was riddled with many inaccuracies of a criminal nature and constituted a violation of the relevant intelligent statutes, and compromised the security of the state.

On Monday, NB Publishers, through a lawyer’s letter to the SSA, said it would not desist from making Pauw’s book publicly available.

The publisher denied the SSA claims the book was “replete with inaccuracies” and threatened national security.