The trainees were initially recruited for deployment, but after failing a subject in their exams in 2013, their contracts were terminated. 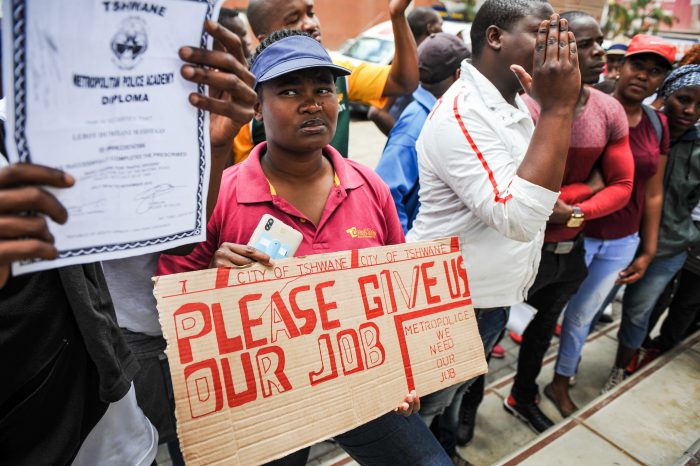 Former Tshwane Metro Police Department trainees chanted outside Tshwane House yesterday demanding to be reinstated and accusing mayor Solly Msimanga of “lying” and promising them “heaven and earth”, yet not doing anything.

About 200 former TMPD trainees claimed they completed training courses and received diplomas, but have been without work for three years.

The trainees were initially recruited by the former ANC-led municipality for deployment, but after failing a subject in their exams in 2013, their contracts were terminated.

They were, however, afforded an opportunity by the former ANC-led administration to complete the course last year and Msimanga, during his election campaign, promised to reinstate them once he took office.

“Msimanga used to come to us and promise us that once he comes into office, he will immediately make sure he can take us in by August this year. He promised we will even do a three-month course with the SA Police Service, but that was a lie as we have been waiting since,” said one of the trainees, Prayer Green.

Another trainee, Khuliso Makhubela, said member of the mayoral committee on community safety Derrick Kissoonduth and the city’s human resources department had told them they would be reinstated and that they were only awaiting approval from the city manager.

“Kissoonduth said all our issues had been dealt with and they assured us that they only need a signature from the city manager.

“The mayor also said they would source funds from other departments and Treasury to accommodate us. But now they are playing hide and seek.

“All we are asking for is to practise what we trained for over the past three years. We have been sitting at home hopelessly. The mayor said he would fix all the faults caused by the ANC. When they go to the public, they promise heaven and earth, but now they are ignoring us.”

Kissoonduth said the trainees only completed the first phase of training and there were hurdles to offering them permanent employment as security guards.

“I have spoken to the city manager and the mayor, but to re-employ them is a process. We suggested taking them on as security guards but, first, we need money for salaries and then uniforms. This was not budgeted for when this decision was made,” he said.

“And the numbers keep growing. Initially it was 185, then they say it’s 207. Everything is going back to the drawing board now.” – rorisangk@citizen.co.za