Middleman in Panayiotou murder trial not indemnified from prosecution

It is understood that a warrant of arrest will be issued soon, and Siyoni is likely to stand trial. 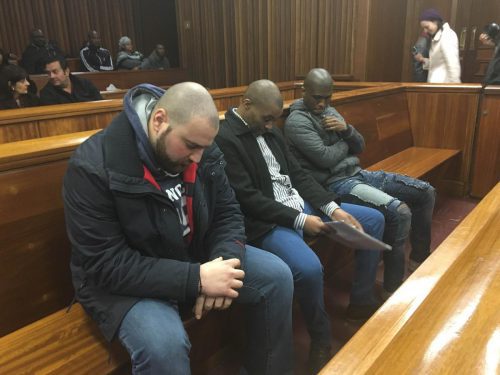 Self-confessed middleman Luthando Siyoni, who allegedly arranged a hitman to kidnap and kill Jayde Panayiotou, is not indemnified from prosecution, the Port Elizabeth High Court ruled on Thursday.

It is understood that a warrant of arrest will be issued soon, and Siyoni is likely to stand trial.

Judge Dayalin Chetty ruled that Siyoni, who was a Section 204 witness, was not indemnified from prosecution, and criticised his lawyer Zolile Ngeza for acting in a duplicitous manner.

Siyoni was not present at proceedings, but Ngeza addressed the court, saying that Siyoni was a victim, and had testified to the best of his ability.

However, at the trial-within-a-trial, Siyoni had recanted his statements made to police and refused to answer any of state advocate Marius Stander’s questions.

Ngeza had advised Siyoni not to answer any questions that could incriminate himself on the stand, even though a Section 204 is expected to be truthful about the events in question.

Siyoni, together with his girlfriend Babalwa Breakfast, were both subsequently declared hostile witnesses.

Chetty said that Siyoni was incapable of making any meaningful contribution, and in his earlier judgment slated his evidence as a “cocktail of lies, perjury and contrivances”, designed to advance co-accused Christopher Panayiotou’s defence.

Siyoni is now not off the hook in relation to charges which include conspiracy to commit murder, murder, robbery with aggravating circumstances and defeating the ends of justice.

Meanwhile, the state called for the minimum sentence of life imprisonment for Panayiotou and Sinethema Nenembe.

Panayiotou was earlier convicted of his wife Jayde’s murder, while Nenembe was convicted for murder and robbery with aggravating circumstances.

The state asked that Zolani Sibeko, who was convicted of conspiracy to commit murder, be jailed for a period of 18 years.

“There was more than enough time to withdraw. [Panayiotou] showed no remorse and he paid for the rental of that vehicle and slept in the same house as Jayde for 13 nights before it happened, he never put a stop to it.”

Stander said the way in which it was meant to look like a robbery was extremely aggravating.

“Jayde had no possibility to defend herself. I go cold when I think about what could have gone through Jayde’s mind when she was kidnapped. This was a cold-blooded callous execution.”

Stander said that the claim by his family that Panayiotou was a kind person, was obscured.

“To stand up at a funeral and praise her and looking at what’s said in that [sting] video – that falls to being a psychopath, not a kind person,” he said.

Meanwhile, Defence Advocate Terry Price asked for a sentence less than life. He asked the court to take into account that Panayiotou was a first offender and had a good chance of rehabilitation.

“He cooperated with police, he has always had impeccable manners, we humbly ask for mercy in giving a lesser sentence than life,” said Price.

Sibeko’s attorney, Peter Daubermann asked for a four to five year sentence, adding that his client withdrew from the conspiracy.

However, the State argued that Sibeko did much more, in that he scouted for Jayde and the murder was eventually committed.

“There is no room to say that Sibeko withdrew from the conspiracy. What is correct to say is that he didn’t complete his role,” said Stander.

Chetty will pass sentence on Friday.

How Christopher Panayiotou was nailed for his wife’s murder