‘Jayde’s murder a business deal, and Panayiotou showed no remorse’

Judge Chetty said it had become apparent from the inception of the trial that Panayiotou had taken no responsibility for his actions. 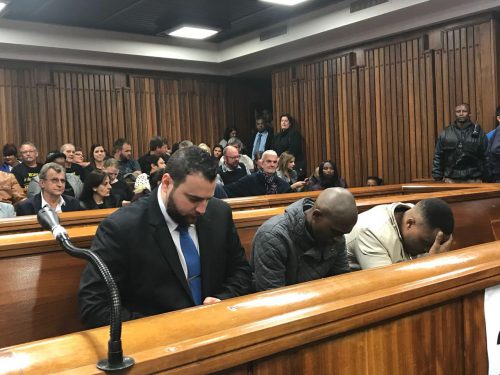 Christopher Panayiotou and co-accused Sinethemba Nenembe and Zolani Sibeko were on Friday sentenced for their roles in the 2015 murder of Jayde Panayiotou. PHOTO: Raahil Sain/ANA

On Friday, Christopher Panayiotou was sentenced to life imprisonment for the murder of his wife Jayde in April 2015, and was wholly criticised for his complete lack of remorse and defiance in not taking responsibility for his actions.

“The execution was months in the making. It involved a string of would-be assassins and when the willing killer was eventually found, time, money and energy was expended to ensure its success. In all that time, Jayde was blissfully unaware that the man she shared her bed with had set in motion a process which would ultimately lead to her death.

“When the video was played here in this very courtroom and his involvement in her murder exposed, he remained nonchalant. Maybe, to him, it was just business, given his acumen for it,” Judge Dayalin Chetty said before he sentenced Panayiotou to life imprisonment.

In the Court A in the Port Elizabeth High Court, Jayde’s family jumped for joy from their seats in jubilation and displayed three middle fingers, a symbol from the Hunger Games movie franchise, a favourite of Jayde’s. The three finger salute is a symbol of thanks, admiration and to say goodbye to someone you love.

Panayiotou’s co-accused Sinethemba Nenembe was sentenced to life imprisonment for murder and 15 years for robbery with aggravating circumstances, while Zolani Sibeko was jailed for 15 years on conspiracy to commit murder.

Panayiotou had hired self confessed middleman Luthando Siyoni to hire a hitman to kidnap and kill Jayde. The schoolteacher was kidnapped outside her home in Kabega Park while waiting for a lift to work. She was shot execution-style on the outskirts of Kwanobuhle.

A warrant of arrest has since been issued for Siyoni, subsequent to the court’s finding that that the Section 204 witness was not indemnified from prosecution.

Jayde’s mother Michelle Inggs said that the family were satisfied with the sentence handed down to the men convicted of involvement in her daughter’s murder.

In passing down sentence, Chetty was scathing towards Panayiotou’s conduct while the businessman remained brass-faced throughout proceedings, showing no emotion, even after his fate was read out.

Chetty said that it had become apparent from the inception of the trial that Panayiotou had taken no responsibility for his actions. “As the evidence unfolded and his orchestration of Jayde’s murder laid bare, he has remained indifferent, defiant and, notwithstanding the sheer weight of the evidence against him, persists in avoiding all responsibility for his murderous conduct.

“This much is apparent from his counsel’s intimation to me even before a date for the sentencing stage of these proceedings had been determined that he would seek leave to appeal against his conviction. This cock-a-snook attitude accentuates his complete absence of remorse.”

Chetty said Panayiotou’s conduct in the frenzied aftermath of Jayde’s disappearance from the Stellen Glen complex established the full extent of his machiavellian personality. He said the charade began when Jayde’s friend Cherise Swanepoel telephoned the businessman to enquire about Jayde’s whereabouts.

“It provided confirmation that the preparatory step for the planned execution had succeeded and Jayde’s death, imminent. [Panayiotou’s] conduct thereafter attests not only to his disingenuousness, but moreover his capacity to deceive friends and family. Cognisant of the true state of affairs, he feigned ignorance, exclaimed that ‘something is not right’ and accompanied Ms Swanepoel in the abortive search for Jayde.”

Chetty said that he had no doubt that the sight of Jayde’s lifeless body reduced both her father Derrick Inggs and father-in-law Costa Panayiotou to tears but, assuming that Panayiotou in fact shed a tear, it could only, given his orchestration of Jayde’s death, have been crocodile tears.

Chetty stated that while he accepted that Panayiotou was a product of a close-knit family and the trial unduly painful for them, he could not overlook the incalculable loss suffered by Jayde’s family.

It was further found that Nenembe and Sibeko’s involvement in Jayde’s planned execution was actuated by their love of money – an incentive for their participation in the plan to kill an innocent young woman.

It was earlier found that Nenembe was on the scene when Jayde was shot, Chetty said that there was nothing to suggest that he was a passive bystander. “If he was, he was at liberty to say so but chose to remain silent. His presence during the murder established that he was an integral part of the plan – his role and moral culpability no less than the actual killer’s.”

Chetty said that he was driven to the conclusion that Nenembe had a “dual personality” in that his academic achievements stood in stark contrast to his ascension, in later life, to a career in crime. In 2014 Nenembe was convicted and sentenced to eight years behind bars for a housebreaking offence.

Chetty said his participation in Jayde’s murder a year later demonstrated that he was not averse to violence. “What is particularly disturbing is that the inducement for his participation in the murder was the expectation of financial gain. The evidence established that [Panayiotou] only handed the money to Siyoni after the murder and [Nenembe’s] involvement was thus triggered by the hope that the money would materialise.”

Chetty said the submission that Sibeko withdrew from the conspiracy to have Jayde murdered was without basis, and if Sibeko did withdraw he had the opportunity to say so but chose not to.

Panayiotou’s defence team are expected to bring an application on December 13 for leave to appeal against his conviction.