A neurologist has testified that malingering (or feigning an illness for secondary gain) is so unlikely it can be disregarded in the case of 23-year-old triple murder accused Henri Van Breda. 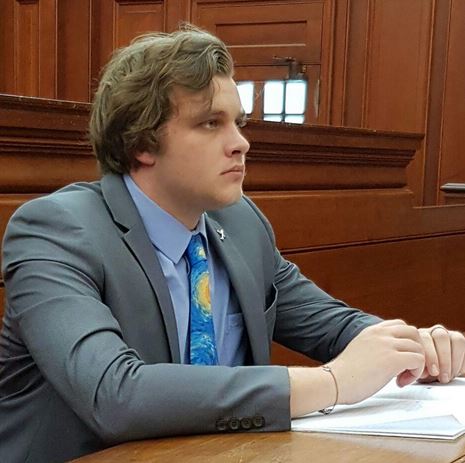 Defence witness Dr James Butler testifed for a second day on Tuesday that Van Breda undoubtedly had an epileptic seizure on the night his parents and brother were murdered, and his sister severely injured in their Stellenbosch home in January 2015.

He told the court that a photograph taken after the murders showed Van Breda had wet his pants, and that there was a lot of urine on both the front and back of his shorts. “He said he was not aware of wetting his pants prior to the period of amnesia. That would suggest the urinary incontinence occurred during the period of amnesia, the 2 hrs 40 minutes.”

Butler told the court that incontinence was a frequent feature of an epileptic seizure, but Judge Siraj Desai pointed out that it could also have been triggered by the events of that night.

Butler said Van Breda would have experienced a “postictal state” after the seizure and his brain would not have been working well, which could also explain Van Breda’s lack of urgency when he called emergency services. “People are slow, sluggish and dull.

“He told me he felt disorientated afterwards. He said his memory was fragmented and gradually improved.”

He said three factors contributed to a higher risk of seizure that night – sleep deprivation, drinking too much alcohol and extreme stress. “Those are precipitants for seizures.”

Van Breda claimed that he shared a bottle of wine with his father earlier that evening. According to Butler, when “alcohol has disappeared out of the brain you are more vulnerable”.

During cross-examination, Butler conceded there is no medical evidence, like scarring one would find from a heart attack, after a seizure.

Senior state prosecutor Susan Galloway said Butler would have had to believe the information Van Breda had given him. Furthermore, Van Breda could easily have googled epilepsy to find out more about the symptoms of the condition.

Van Breda claims an intruder armed with an axe and a knife, and wearing dark clothing, a balaclava, and gloves, was behind the attacks. He said, in his plea explanation, that during the pursuit of the attacker he lost his footing and fell down the stairs. He added: “I do not know what made me fall, but my fall was quite severe.”

After the attacker fled, and after trying to phone his girlfriend without success, the accused said he went up the stairs, where he could hear his brother Rudi in the bedroom. On the middle landing towards the top, he saw his sister Marli moving.

“I then lost consciousness. I am unsure whether this was due to shock or to the injuries that I sustained when I fell down the stairs, or a combination of both.”

Butler told the court the time lapse of two hours and forty minutes, which Van Breda claimed was the time he was unconscious before contacting emergency services, was not just amnesia.

The trial of the 23-year-old stood down two weeks ago when the court heard that Van Breda had a seizure on November 8. He spent the weekend in hospital where he underwent a series of tests and was diagnosed with juvenile myoclonic epilepsy.

WATCH: Henri van Breda’s girlfriend – 'He’s not a killer'
3 years ago
3 years ago

WATCH: Henri van Breda’s girlfriend – 'He’s not a killer'
3 years ago
3 years ago