The six bicycles were sponsored by Wayne Pheiffer Cycles as the sourcing of bicycles for law enforcement were not included in the annual budget. 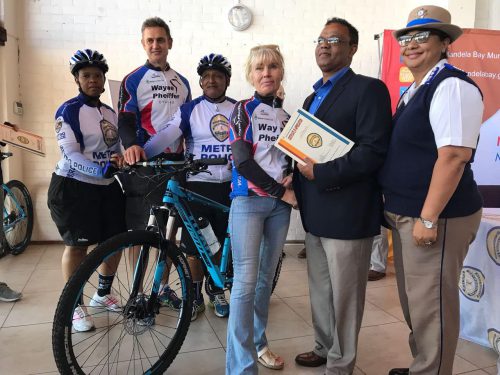 Nelson Mandela Bay Municipality on Thursday launched the summer season safety plan and for the first time the metro will be having metro police officers on bicycles to monitor the city’s beachfronts.

All in all there are 109 Nelson Mandela Bay Metro Police officers who were inducted earlier in March this year. The officers hit the streets this year after the introduction of a metro police service in Port Elizabeth had been in the pipeline for about eight years.

At the launch on Thursday, Mayoral Committee Member for Safety and Security, John Best said that every single plan the metro executed over the festive season was in conjunction with the South African Police Service. Best said that there would be a zero tolerance approach when it came to the consumption of alcohol on the Bay’s beaches.

“Unfortunately we still have that culture where we come to the beach and we drink. We are going to stop that culture. People who live on the beachfront and tourists need to feel safe,” said Best.

Best said that metro police visibility on the beaches were not exclusive to Summerstrand.

“We must not forget about Motherwell, Maitlands and Beachview. We will make sure that we cover all our beaches,” he said.

Port Elizabeth top cop Major-General Dawie Rabie, outlined the National police plan over the festive season, with a pre-holiday season which took place between 13th to the 30th of October.

Dawie said the start of the holiday season which begun on December 1 will see major road blocks on route to holiday destinations, special operations at ports of entry and higher police visibility at shopping malls and beachfronts.

The third phase of police operations get underway from December 16 until January 2. During this time period Dawie said that crime prevention operations would take place at holiday resorts, intelligence driven operations conducted for drugs and firearms and a special operation to take place on Opening of the Season celebration which takes place in Summerstrand annually.

“Last year we didn’t have many metro police, this year we have more. There will be zero tolerance on the use of alcohol at beaches. We promise that we will be very visible,” said Rabie.