Showdown over ‘monkey’ and ‘baboon’ slurs shuts down department of justice

Two white staff members have been suspended pending a probe into their Facebook posts. 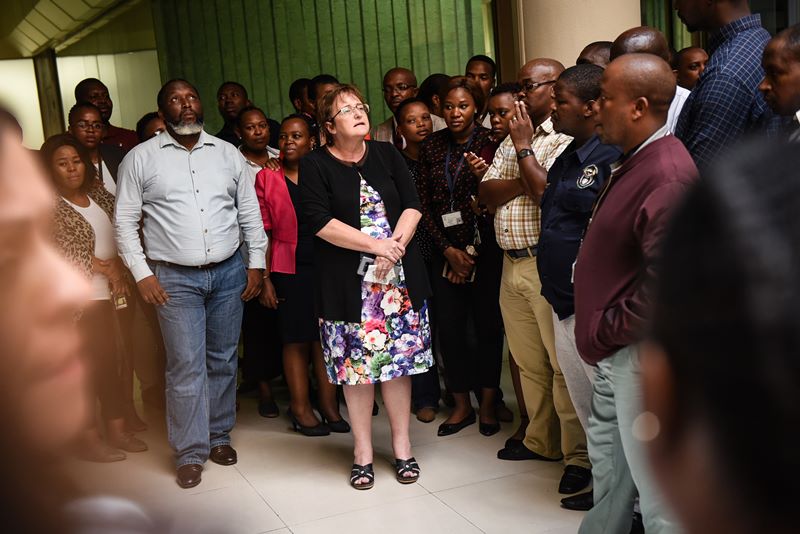 Chief Financial Officer at the Department of Justice, Ms. Louraine Rossouw, speaks to staff about the racist comments made on facebook by coworkers at a meeting outside the entrance of the building in Pretoria yesterday. Picture: Jacques Nelles

Allegations of racial slurs posted on Facebook brought the department of justice in Pretoria to a standstill yesterday afternoon as staff gathered to demand the immediate suspension of two co-workers.

The angry staffers sang struggle songs and demanded that the department’s chief financial officer, Louraine Rossouw, address them in person because the alleged perpetrators and their victims all work in her department.

They were supported by Peter Masango from the National Education, Health and Allied Workers’ Union (Nehawu) and Thabo Thobakgale from the Public Servants Association of South Africa (PSA). The alleged victims, Richard Vukeya and Wisani Hobyane, accused two of their colleagues, Natasha Steynberg Roos and Lourens Botes, of referring to them on Facebook as “monkey” and “baboons” in four conversations over a period of four months.

In a second conversation, on June 1, Roos allegedly wrote to Botes: “Did you hear what your bobbejan friend Mr Wisani did today?”

On November 1, 2017, Botes apparently wrote to Roos: “Did you see that monkey request leave audit?” Roos replied: “Don’t worry Poppie is protecting us. his request will go nowhere.”

In another latest Facebook conversation, Roos apparently wrote to Botes: “That baboon is going to a disciplinary hearing!! God is goed!” To which Botes replied: “Haha when is it? lets hope they let him go.”

Vukeya and Hobyane said they had complained about racism to the department last year, to no avail.

A livid Vukeya added: “I am so angry that I cannot even get into a lift with a white person.

“But I also know that I should believe that all white people are not like these people who violated me.”

Nehawu’s Masango said: “What is worse is that this kind of racism is happening in the department of justice. We, as Nehawu, cannot allow people to call their colleagues baboons and monkeys after 24 years of democracy. This is disgusting.”

Thobakgale said the PSA and Nehawu had agreed with the chief financial officer to have a follow-up meeting later this month to discuss the investigation and what steps had been taken.

Rossouw called it a very sad day: “We should be like Nelson Mandela wanted us to be, building each other up. I am really disappointed about what transpired here.

“I gave instruction to the human resources department to start investigating and we will try to do this as quickly as possible,” she said.

Rossouw confirmed that Roos and Botes had been suspended pending investigations. 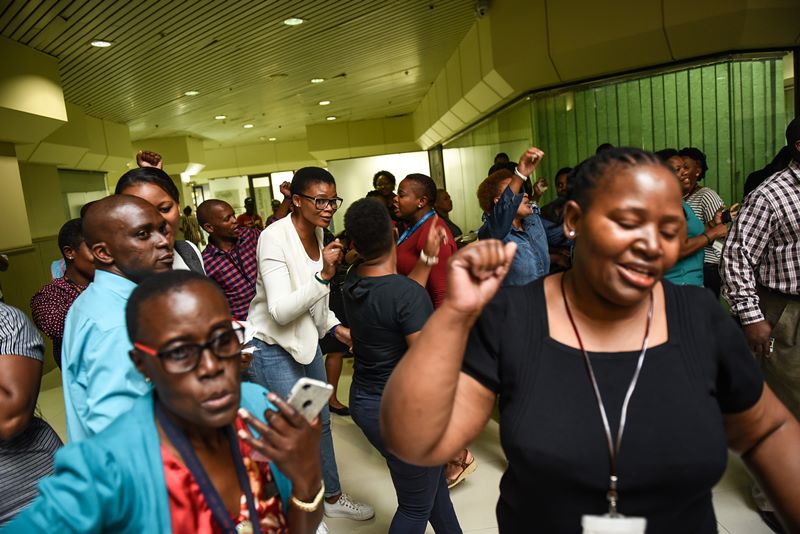 Staff members from the Department of Justice are seen protesting outside the building after the racist comments made on facebook by coworkers came to light in Pretoria yesterday. Picture: Jacques Nelles