The president says Zuma will pay back the money if it is found he had acted in his personal capacity when committing the offences he is charged with. 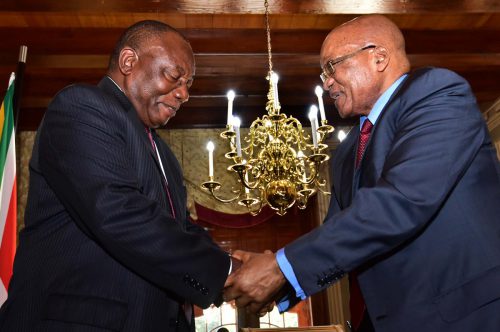 President Cyril Ramaphosa told parliament during his question and answer session that according to information from the Department of Justice and Correctional Services, R15.3 million has been spent by the state on the personal legal costs of former president Jacob Zuma since 2006.

Ramaphosa was responding to a question posed by the Economic Freedom Fighters (EFF), the leader of which, Julius Malema, was least impressed by the president’s answer.

Ramaphosa said of this amount an approximate R7.5 million was spent during the period 2006 and the withdrawals of charges against Zuma in 2009.

The president said the costs arose from a request by Zuma that the state pays for his legal expenses.

“The request was approved by the presidency based on advice from the state attorney’s office and the department of justice and constitutional development as it then was,” Ramaphosa said.

He added that the former president signed an undertaking to pay back the money if it is found that he had acted in his personal capacity and own interests when carrying out the offences he was charged for.

“This administration is guided by the fundamental principles that public money should not be used to cover the legal expenses of individuals on strictly personal matters and who are found to have committed criminal offences,” Ramaphosa said.

Malema questioned which law had been applied or policy to approving paying for Zuma’s legal fees.

He said the amount announced by Ramaphosa does not include the Nkandla case and Zuma’s court bid to block the former Public Protector’s report, adding that if these were to be added to the R15 million it would balloon to R64 million, accord to calculations made by the EFF.

Ramaphosa assured parliamentarians that the agreement between the state and Zuma states that should it be found that Zuma had acted personally when committing the offences he is charged with then the government would recuperate its money.

He added that this is not the first time that a government official entered into such an agreement.

The leader of the Democratic Alliance (DA) argued that considering that Zuma is a pensioner he could drag out the legal proceedings for years, which would further cost the public purse.