The people of this small Free State town still remember her with great affection, especially because of her love for children. 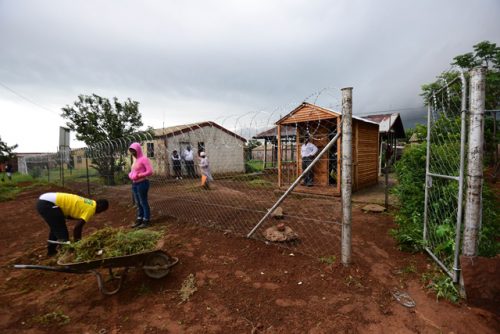 Majwemasweu Township residents help to clean the dilapidated house of late struggle icon Winnie Mandela's home at Phatakahle Section at Brandfort in Free State, 4 April 2018. In July 2012, it was reported that the Free State government, led by Premier Ace Magashule set aside R3-million for the project. Another R2.5-million tender reportedly went out in early 2013. Picture: Nigel Sibanda

Brandfort – To most of the world, she was the embodiment of courage and strength, but Winnie Madikizela-Mandela exuded loneliness at the absence of those that she knew and loved during her banishment to the Free State town of Brandfort.

Madikizela-Mandela was exiled to Brandfort in 1977 by the apartheid government in the hope that people would soon forget her. But they were so wrong.

Eventually, she emerged triumphant, embodying resilience as she forged on in the struggle.

The Citizen visited Brandfort this week following Madikizela-Mandela’s death on Monday, and what we found was love and affection in the eyes of the people in the community who knew her.

At the age of 41, she was dumped in the small town with her youngest daughter Zindzi to live in a three-room conjoined home.

She didn’t speak the local language of Sotho and house 802 was fenced off from the rest of the community.

Residents were threatened with jail if they were caught speaking to her. But that did not stop her. Even though she described her eight-year exile as one of the worst times of her life, she showered the children of Majwemasweu township with love and gifts, we were told. They called her “mama”.

Her former neighbour and close friend Norah Moahloli said: “There was a communal tap right outside my house, which was used by five households, including Mama Winnie. We had big drums for the water but, unlike us, she had a pot.

“Since she wasn’t allowed to interact with people, she would only come out to get water at night. But her water ran out quickly so she would wait for a child to walk by during the day and ask them to get water for her.”

In an interview with talk show host Felicia Mabuza-Suttle, Winnie once said: “Those were very difficult times. Perhaps a person like myself would single out the banishment to Brandfort – the separation from my children and what the security branch did almost every time my children came back from boarding school. I had to put them in boarding school at an early age because I was spending a lot of time in prison.”

Police with binoculars were deployed in a tower on a hill opposite her house to constantly monitor her and take note of every single person and vehicle that went to or near house 802. But what pained the anti-apartheid activist most was a police raid on her home when Zindzi’s friends were visiting, Moahloli recalled.

“The authorities burst through the doors of that house and started beating the teenagers. Some of them escaped through doors and windows. Back in those days the police were very brutal. One of the children’s shoulders was dislocated by a rubber bullet fired by police. That is what hurt Mama Winnie the most. That her children were affected because of her. It upset her that the apartheid authorities harassed her children, too,” she said.

The phone lines, which several households shared, were also bugged by the apartheid authorities so Madikizela-Mandela had to use the public phone at the local post office to communicate with her children.

She often sat and waited by the public phone for a call from her daughters before her 6pm curfew, when she had to be back inside the house.

The love and attention her children lacked while they were growing up was poured into the youth of Brandfort, who often skipped back to her house immediately after school for sweets and food.

Mantoa Lekaota, chairperson of the ANC Women’s League Papiesteyn branch, was a 10-year-old girl when Madikizela-Mandela came to her neighbourhood in 1977.

She recalled how Mama Winnie would drive to a nearby school in her Volkswagen to pick up the children and drive them home.

“There wasn’t a single child who didn’t love her. She even opened up a creche for the children of Brandfort in a Methodist church that still operates today. I love what she left behind in our community to be proud of. Before Mama Winnie, there was no ANC in Brandfort at all. And now I am the chairperson of the ANC Women’s League branch. At the time, I didn’t even know I could do that. I tried to pick up where she left off,” she said.

Despite the apartheid regime’s cruel and continuous attempts to isolate, humiliate and torture her, Madikizela-Mandela’s love for her people lit up the darkest days of her life, leaving a legacy for the Brandfort community.

“She loved the children here. She would often ask her friends overseas to bring jackets and shoes for them.” – rorisangk@citizen.co.za