Unlike last year, Mayor Solly Msimanga's second state of the capital address went ahead without any interruptions or delays. 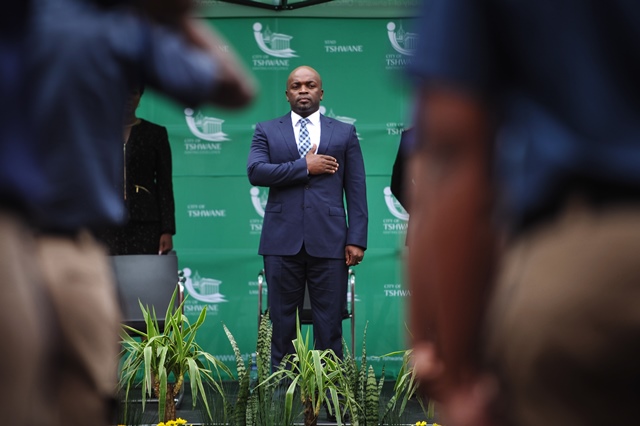 Sinkholes, cable theft and land grabs were some of Tshwane’s most pressing concerns, Democratic Alliance mayor Solly Msimanga said in his second state of the capital address yesterday, which proceeded with no interruptions.

He also highlighted some of the achievements of his multiparty administration over the past two years.

In line with the Economic Freedom Fighers’ call for quality healthcare in 2018, Msimanga announced that the city would be partnering with pharmacies to dispense medication to avoid long queues at local clinics. The EFF is the DA’s ally in the council.

“This will make it easier for us to bring primary healthcare and medication closer to the people who need it most and avert some of the protracted waiting in queues often suffered by old, ailing and frail residents,” said Msimanga.

Tshwane EFF leader Benjamin Disoloane said his party was pleased Msimanga was pushing its proposals, which include establishing a 24-hour clinic in the city.

“As the EFF, we declare this year as the year of public health,” said Disoloane. “We are happy that the mayor agreed to provide a 24-hour clinic.

“We are going make sure it is implemented. What the mayor is saying is the manifesto of the EFF.

“We need to push harder and bring more motions so the city delivers.”

Proceedings began with songs in memory of the late Winnie Madikizela-Mandela, led by EFF councillors. They were joined by black-clad, doek-wearing ANC members, and DA members.

One of the mayor’s major talking points was the “shocking” level of cable theft in the capital, with 1 498 incidents of cable theft and vandalism reported since November last year.

“In the original conception of this speech, it was not my intention to address this matter so early,” he said. “But I have often found it quite peculiar that while Tshwane is not a major producer of copper, it seems to be one of the largest marketplaces for the sale and trade of copper.”

Msimanga added that he would engage with the minister of police, national and provincial police commissioners, the MEC of community safety and municipalities about working together to “drastically reduce cable theft, jail the culprits and assist us in providing reliable service to our people”.

In what the ANC described as a “flat speech”, Msimanga touched on recruiting expert staff, repairing the 27 sinkholes in the capital and building 40 RDP houses in Atteridgeville next month, using the R5.1 million proceeds from the auction of the mayor’s house last year.

But Tshwane ANC caucus spokesperson Lesego Makhubela said Msimanga’s speech was “full of lies”, adding the city had “regressed” since he took over in 2016.

“We have regressed in so many ways in terms of service delivery and underspending. There is so much money that is not being spent in black communities and projects that have been halted in townships.

“Even if Rome was not built in a day, as the saying goes, at least Msimanga must show us he has laid the foundations and has started building.”