Mokoena told the court that a security guard showed her Karabo's passport and ID, which he said he had found in a dustbin at Mantsoe's residence. 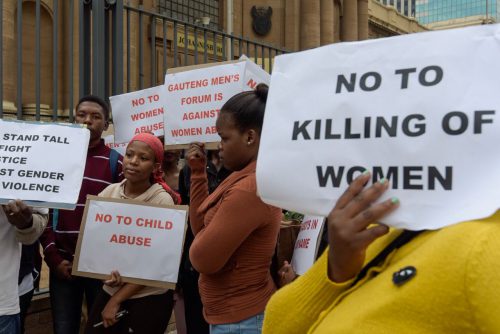 Protesters stand outside the Johannesburg High Court in preparation for a hearing of Sandile Manstsoe, the alleged killer of Karabo Mokoena, on 16 April 2018. Picture: Yeshiel Panchia

The sister of Karabo Mokoena, who was allegedly killed by her boyfriend, Sandile Mantsoe, told the Johannesburg High Court on Tuesday that she saw security footage of her sister entering and leaving his residence.

Mantsoe has pleaded not guilty to killing the 22-year-old and burning her body before ditching it in a veld last year, and claims she committed suicide.

Mokoena said Mantsoe had fed her many stories abut Karabo’s whereabouts after she disappeared, including suggesting she liked booking hotel stays and that she had gone off with a Nigerian man.

She said after Mantsoe was arrested, her tearful mother had asked him where her missing daughter was, and he answered: “I don’t know, mamzo, but I didn’t kill her.”

Mokoena said the relationship between Mantsoe and Karabo had begun in 2016 and lasted eight months before the pair broke up before her birthday on March 27.

On Karabo’s birthday, the family couldn’t get hold of her until she called the next day to say she was in hospital with injuries sustained after Mantsoe assaulted her.

“One of her eyes, leg and her shoulder were bruised,” Mokoena said, confirming that photographs shown in court were of Karabo in hospital after the beating.

“I took her back to Mantsoe’s apartment at Sandton Sky, and told her to take her stuff, and we got home,” Mokoena said, adding, however, that Karabo refused to go home, as she did not want their father to see her in that state.

The sisters then agreed that Karabo would go to her friend Michelle’s place.

Afterwards, Karabo returned home, where she stayed until her disappearance on April 28.

Mokoena told the court that she and some companions had gone in search of her sister at Sandton Sky, Mantsoe’s residence, after she went missing, where a manager showed them video footage of Karabo entering and leaving the building.

She said she could not tell what time of the day it was from the security footage, but that Karabo was wearing a pink leather jacket and pink Timberland boots.

A security guard showed her Karabo’s passport and ID, which he said he had found in a dustbin at the complex. While the group was talking, they saw Mantsoe drive in with another woman.

Mokoena said her sister’s relationship with Mantsoe had started off well, before souring.

“Karabo once said to me, Sandile sometimes speaks to me like he doesn’t care about me. Karabo would do anything for Sandile, even after the assault, my mother said to Karabo that he would kill her,” she said.