Schools in Atteridgeville are being targeted by 'syndicates', while the DA says community members keep on buying goods stolen from schools. 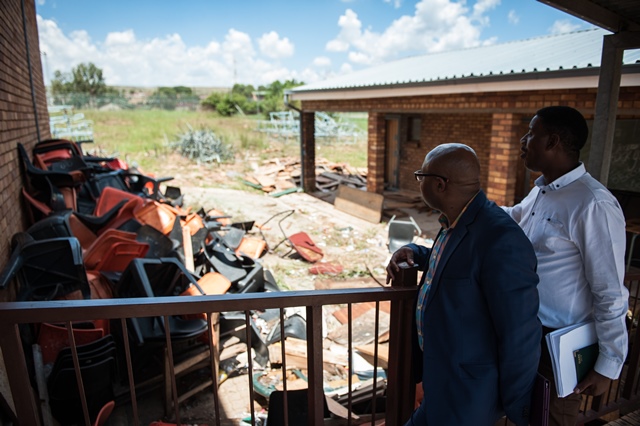 DA Gauteng Shadow MEC for Education, Khume Ramulifho, looks at a pile of broken chairs and desks that were destroyed by students at the Phelindaba Secondary School during an oversight visit, 12 March 2018, Atteridgeville, Pretoria. Picture: Jacques Nelles

The Gauteng department of education is considering deploying armed security personnel to put a stop to a “syndicate” that has been targeting Atteridgeville schools, west of Pretoria, for the past six years.

The security proposal is being considered for inclusion in the department’s 2018-19 budget.

However, the Democratic Alliance dismissed this, saying it would only be a short-term solution because community members keep on buying goods stolen from schools.

Gauteng education MEC Panyaza Lesufi recently told the Gauteng Legislature that his department was engaging the police and the department of community safety in the province regarding security enhancements at schools.

“The department is also considering the installation, maintenance and repair of safety devices, such as alarm systems, surveillance cameras, palisade fencing and placement of armed security personnel at the schools in the 2018-19 financial year,” Lesufi said.

He was responding to questions by the DA Gauteng shadow MEC for education Khume Ramulifho.

In his written reply, Lesufi said a total of 27 schools had been broken into in the past four years. There had been 101 break-ins and theft of goods and equipment in all of these schools to date.

In the 2017-18 financial year, break-ins have more than doubled with as many as 20 break-ins reported at FW Nkomo High School. Bokgoni Technical School suffered nine break-ins in 2016-17 and Masizani Primary School had nine break-is in 2015-16.

Phelindaba Secondary School in Atteridgeville had been broken into three times since the start of this year, with thieves making off with four smart boards worth R400 000, as well as laptops and other valuable items.

Lesufi said: “The status of these cases is unknown. The schools have indicated that they have not received any feedback or update report from the police.”

Ramulifho said this is a sign that the “police are not doing their job. This is very disappointing that certain criminals within the communities are using schools for a platform for looting.”

He said while the DA was welcoming Lesufi’s suggestions to safeguard schools, he said the armed security personnel would only be a short-term solution.

Ramulifho added that for the education department to stop these daylight robberies and looting, police should have a rapid response team in place and ready.

He also said there was a suspicion that some of the break-ins were inside jobs, and the fact that no one had been arrested and convicted raised many questions.