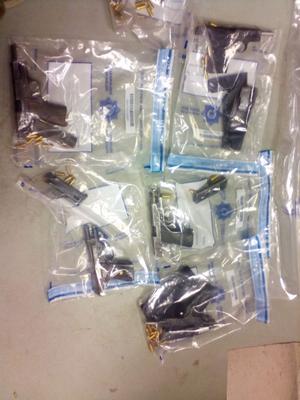 Police in the Cradock area in the Eastern Cape have arrested 12 people and seized eight illegal firearms, including an AK47 assault rifle. Photo: SAPS

In the police’s efforts to curb crime caused by the proliferation of firearms, including murders, house and business robberies, car and truck hijacking, officers had been urged to be “cautious and vigilant when their instincts are being followed” during stop-and-search operations, Colonel Michelle Matroos said in a statement.

This had paid off on Saturday when two off duty police officers from the Cradock K9 unit followed up on information received from their colleagues at the Queenstown K9 unit and the public order policing unit about a Toyota Quantum minibus travelling towards Cape Town, allegedly conveying illegal firearms, she said.

“They booked themselves on duty and started to patrol the area just outside Cradock were they stopped the vehicle. During a search of the vehicle, 12 male occupants were arrested for possession of illegal firearms and unlawful possession of ammunition.”

Seven pistols, one AK47 rifle, and several rounds of ammunition were seized. The firearms would be sent for ballistic testing. The suspects would appear in court early next week, Matroos said. 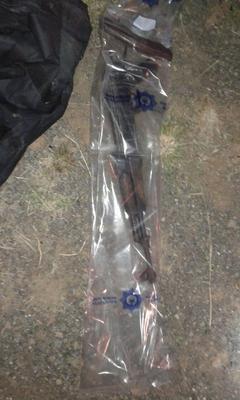 Eastern Cape police commissioner Lt-Gen Liziwe Ntshinga praised the team for their vigilance and the recovery of the illegal firearms.

“Our back to basics approach is bearing fruit with good, old fashioned police work. We will continue to stamp the authority of the state, with increased operations throughout the province.

“Our robust approach will continue to eliminate the proliferation of illegal firearms that contribute to the commission of crime and even the loss of innocent lives. We will not hesitate to act against individuals who continue to contravene the law,” she said.