The report also lays the blame for attacks on the remoteness of farms, which contradicts the view that the brutality are the result of racial hatred. 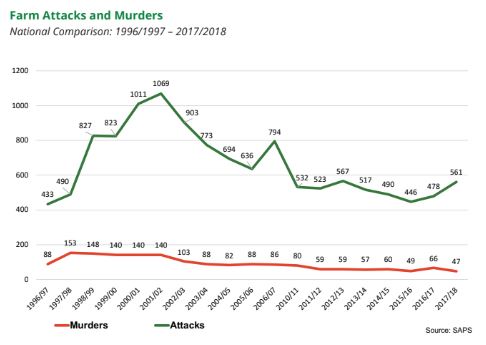 Graph of farm attacks and murders.

The never-ending debate about farm murders, and the claims that South Africa is in the midst of a “white genocide”, got another twist in its tail with the release of a report from an official farmers’ organisation which shows that farm murders are at a 20-year low.

But minority rights group AfriForum has questioned the report, saying the figures are incomplete and unreliable.

National agricultural organisation, AgriSA, has released a report stating there were 561 farm attacks and 47 farm murders during the 2017-18 year.

This represents a slight increase in attacks over the previous year, but still showed a massive dip from the 1 069 attacks and 140 murders in 2001-02, which was the worst year on record for farm murders.

The increase in attacks also went along with a decrease in murders.

AgriSA’s statistics are based on a combination of official police statistics, media reports, and their own statistics.

However, Kobus Visser, AgriSA’s director for rural safety and general affairs, said farm attacks were still one of the agricultural sector’s biggest challenges, and that farmers were still not safe.

The only difference between the past and now was that farmers are better prepared, with better safety strategies and measures, he said.

“The agricultural community alone cannot be held responsible for combating crime. It remains the government’s responsibility to keep all citizens safe. However, the threat to rural safety is of such a nature that the farming community must continue to ensure their own security.”

Visser said the agricultural community had been working with an ally called the Agri Securitas Trust Fund, to devise plans to ensure their safety. The fund had contributed financially towards rural safety systems at farmer association level.

“There are a thousand farmer associations in the country that deal with the issue on local levels and then report to AfriSA on a provincial level … but the safety measures are now more extensive with installations of boom gates and more elaborate camera and communications systems that run for twenty-four hours.”

The organisation compiled the report after the relevant statistics were released in parliament by the South African Police Service, followed by a question and answer session by political parties in parliament for clarity.

Visser said there were many things that influenced the statistical findings besides robberies and murders. The statistics not only include commercial farmers, but also smallholding owners involved in a farming activity, developing farmers, farmworkers, their family members and visitors, and anyone else within the SA farming community.

The report also lays the blame for farm attacks on the remoteness of farms, which contradicts the general consensus that the brutality of farm attacks are the result of racial hatred.

“People who live on farms in rural areas are particularly vulnerable to armed farm attacks, where response times are lengthy because of the remoteness of farms,” it says. “This offers the attackers an opportunity to linger on the premises for longer, with a greater chance of the victim being subjected to a high degree of violence and brutality, compared to crimes in urban areas where the police, security companies and neighbours arrive sooner to render assistance.”

In response to the report, AfriForum’s deputy CEO, Ernst Roets, told The Citizen the figures stated do not gel with those released by the police, or with AfriForum’s own records of farm attacks.

“AfriForum is in possession of more names of people who were murdered in farm attacks than the total number which has been provided by the police,” he said.

“The number released now also doesn’t correspond with the police’s previous figures. According to the former police commissioner, there were 74 farm murders and 638 attacks in 2016-17.

“According to the new figures, there were 66 murders and 478 farm attacks. That is a significant difference.”

Roets also refers to “dark figures”, which are farm attacks which aren’t reported to police, saying it is impossible to determine how large that number is.

“If we look at the under-reporting of violent crimes, one can deduce that the gap is increasing.”

Roets says AfriForum believes farm murders to be an extremely complex crime and that it wouldn’t be possible to reduce the motives to simply one or two reasons.

He does, however, believe political climate and utterances are contributing factors.

ALSO READ: We told you so – Afrikaner parties over farm murder stats