NPA hits back at rights group over Abrahams and Jiba

Freedom Under Law wants Shaun Abrahams and Nomgcobo Jiba to be charged with contempt of court. 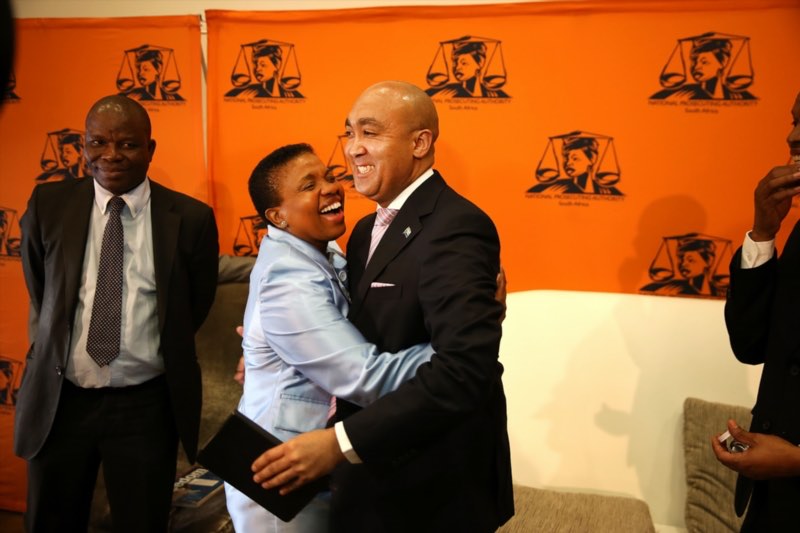 Then National Prosecuting Authority head Shaun Abrahams and Nomgcobo Jiba during a media conference on May 23, 2016 in Pretoria. Picture: Gallo Images

The NPA has hit back at Freedom Under Law (FUL) for threatening National Director of Public Prosecutions Shaun Abrahams and his deputy Nomgcobo Jiba with contempt of court proceedings.

FUL had earlier issued a strongly worded statement in which it accused Abrahams and Jiba of “either having no regard or respect for the courts and the law or being ignorant of the effect of court orders and settled law”.

FUL’s CEO, Nicole Fritz, said Abrahams and Jiba were not fit for any public office, let alone two of the highest law-enforcement positions in the country, and the rights group had instructed their attorneys to prepare an application seeking contempt of court orders against them.

Fritz described a letter by the state attorney, which conceded that Jiba had visited the NPA’s office on several occasions, as “alarming”.

According to the FUL, Jiba’s visits were in breach of a court order prohibiting her from entering the NPA offices or performing any functions relating to her position in the NPA pending the finalisation of her appeal against an order striking her name from the roll of advocates.

Fritz said the letter confirmed that Abrahams was aware of Jiba’s visits and sought to justify it “on an alarming misunderstanding of the judgment and the applicable law”.

NPA spokesperson Luvuyo Mfaku, however, hit back in a radio interview with Jakaranda FM, saying FUL’s intended legal action was “marked with hatred for the incumbent” (Abrahams) by an organisation which has relentlessly pursued Abrahams since his appointment three years ago”.

“They have now degenerated to unprecedented levels of sensationalism and pettiness,” he said.

Mfaku said in an interview with Radio 702 that the NPA had consulted with senior counsel and was of the view that they were not in contempt of court, as Abrahams and Jiba had filed applications for leave to appeal against the court ruling, which automatically suspended the court order and allowed Jiba to continue with her duties.

A full bench of the high court in December last year set aside Abrahams’ decision to discontinue Jiba’s prosecution on fraud and perjury charges.

The court ruled in September 2016 that Jiba and the then head of the NPA’s Commercial Crimes Unit, Lawrence Mrwebi, were not fit to practise as advocates and struck their names off the roll of advocates.

The ruling followed a series of court judgments that found Jiba and Mrwebi to be dishonest, without integrity, lacking in independence sufficient to discharge their functions and unworthy of being called advocates.

Soweto man accused of storing human body parts in a fridge remanded in custody
6 days ago
6 days ago
PREMIUM!

Appeal to freeze R1.6 billion worth of Gupta assets
6 days ago
6 days ago

Medical-record leak not an 'actionable violation' of Zuma's rights, says court
4 weeks ago
4 weeks ago

Soweto man accused of storing human body parts in a fridge remanded in custody
6 days ago
6 days ago
PREMIUM!

Appeal to freeze R1.6 billion worth of Gupta assets
6 days ago
6 days ago

Medical-record leak not an 'actionable violation' of Zuma's rights, says court
4 weeks ago
4 weeks ago