EFF are mainly hunting for votes from traditional leaders – analyst

The sudden 'love affair is an ill-fated ploy to attract votes, as the EFF is realising the chiefs have fallen out with the ANC, a political analyst says. 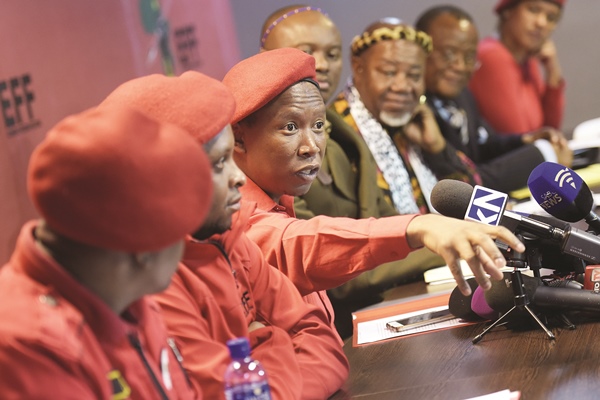 EFF president Julius Malema responds to questions from members of the media during a joint press briefing with the leaders of Contralesa in Johannesburg, 05 July 2018. Picture: Refilwe Modise

Traditional leaders have changed their mind on the Economic Freedom Fighters’ (EFF) policy of land expropriation without compensation – as long as land under black ownership remains untouched.

At a joint press conference yesterday with the Congress of Traditional Leaders of SA (Contralesa) at EFF headquarters, Zolani Mkiva, the secretary-general of the organisation representing the interests of tribal leadership, said they fully backed the EFF’s policy of land expropriation, and want section 25 of the constitution amended to allow this.

The two organisations have committed to host a land summit together in coming months.

But according to at least one political analyst, this sudden love affair is nothing more than an ill-fated ploy to attract votes.

Contralesa said communal land owned by black people should not be expropriated, as it is “not part of the land that was stolen by colonialists”.

But they have now apparently changed their position. The organisation and the EFF now seem to be in agreement on the land issue.

“Section 25 of the constitution must be amended to allow for expropriation without compensation,” Mkiva said.

According to him, the leaders of the two organisations recently “discussed a wide range of leadership policies, with a primary focus on the land question, rural development, the institution of traditional leadership and the 2019 elections”.

“To our mutual and pleasant surprise, the two organisations found they shared common ground on all these issues,” Mkiva continued.

On land, Mkiva said: “We do not buy into the narrative as it currently stands regarding land, with market value being at the centre of the compensation regime, (we don’t believe this can be) a vehicle for a meaningful land distribution programme.

“We further agreed the state should be the overall custodian of all land.

“As Africans and subscribers to pan-Africanism, we also agree the land that currently falls under the custodianship of traditional leaders will continue to be held as such, subject to the primary and overall ownership of the state on behalf of the people.”

Contralesa believes they and the EFF share the view that tribal land should be treated differently to land in the hands of white South Africans – but EFF deputy leader Floyd Shivambu said the ultimate view of the EFF remains that all land should be expropriated.

He wants the issue to be about the “87% stolen land” owned by white people, Mkiva said.

Malema said they were not intimidated by the Zulu king’s recent pronouncements on protecting the Ingonyama Trust, seeing his gathering this week on the issue as progressive.

But political analyst Ralph Mathekga believes the EFF’s wooing of Contralesa may be nothing more than an attempt at scoring political points.

“The EFF is realising Contralesa seems to have fallen out with the ANC and, therefore, the party reaches out to Contralesa for election purposes.

“The EFF has been flip-flopping on land that is being held under traditional authorities. The party is exploiting the ANC’s mishandling of the land issue.”

Mathekga also believes the EFF’s attempt to capitalise on the fraught relationship between the ANC and Contralesa could backfire.

“This will not work. It exposes the EFF’s hypocrisy with the land issue.

“Contralesa does not want its land expropriated. I wonder how the EFF will spin the idea that traditional authorities’ land should be left out of the current land debate.”