‘Somebody has to talk somewhere in this case’

Outa believes that if the heat gets turned up high enough, the Guptas are most likely to implicate Jacob Zuma to save their own skins. 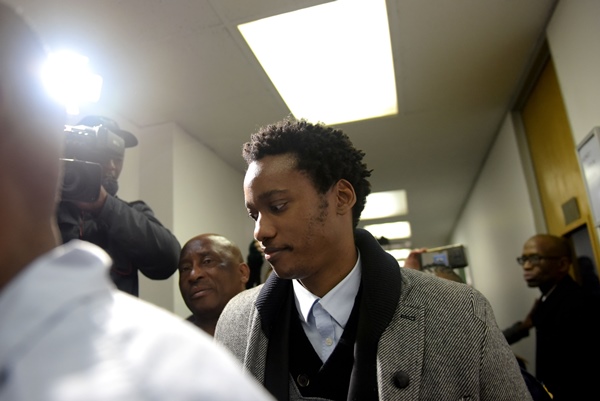 Duduzane Zuma’s appearance in the Specialised Commercial Crime Court in Joburg on Monday morning was just the first shot in what could become an extremely long war and prosecutors may still be no closer to implicating the Guptas or former president Jacob Zuma in the alleged state capture investigation.

Duduzane appeared on a charge of corruption and, as an alternative, conspiracy to commit corruption.

It is alleged he was acting under the instruction of his father when the alleged meeting happened between billionaire brothers Ajay and Atul Gupta, Jonas and Duduzane.

According to the provisional charge sheet shared with the media, Ajay Gupta, in the presence of Duduzane, offered Jonas the position of finance minister, advising him that then finance minister Pravin Gordhan was to be relieved of his position in Cabinet.

It is also alleged that Ajay offered Jonas R600 000 in cash and “assistance with his business ventures with government”.

Duduzane is the first high-profile suspect to be prosecuted.

However, according to the Organisation Undoing Tax Abuse (Outa) chief operating officer Ben Theron, the most likely suspects to finger the elder Zuma would be the Guptas, if they were ever to be brought to account.

“Somebody has got to talk somewhere in this case,” Theron said, referring to witnesses likely to finger Zuma as being behind the meeting “because Duduzane was just the pawn. Somebody has to stand in the dock and say, ‘But Zuma gave the instruction.’

“His son is not likely to do it for obvious reasons, but the Gupta brothers have nothing to lose and are the most likely to give this information.

“The father is, in fact, the problem because the Guptas and Duduzane acted on his behalf; his son was just the proxy. He [Zuma] gave the instruction, because the Guptas were pulling the strings and they wanted a new minister of finance so they could control Treasury. So Duduzane was instructed to set up a meeting.”

Outa, which was behind the initial case being opened against Duduzane, said it was pleased the first accused in its no-room-to-hide report on state capture was in the dock. Duduzane was mentioned 103 times in the report.

“Duduzane was the first person Outa laid charges against for state capture. He is a central figure in our report, which outlines the links between the Gupta and Zuma families,” said Theron.

Legal expert Zola Majavu also believed the chances of the young Zuma turning state witness or implicating his father were slim, as he is currently the only accused.

“It is difficult to tell at the moment who could be called as state witness, but usually it would have to be someone with first-hand knowledge of the events around the crime, and that could be any number of people.

“Even if he were to turn state witness, that does not guarantee he won’t be convicted. The judge could easily decide he was a bad or unreliable witness, or that he was not being truthful and he could still get convicted. But if he is found to be a credible witness and his testimony leads to a conviction, then he may be granted indemnity from conviction.”

Hawks spokesperson Hangwani Mulaudzi said the investigation was ongoing. He said because the docket was confidential he was not able to say whether the Gupta brothers, Zuma or any other role players would be included in the charges.

Duduzane’s appearance in shackles drew plenty of attention but, according to Majavu, this was par for the course and indicated he was not receiving special treatment.

His passport was taken, but he is allowed to leave the province, so long as he reports to the investigating officer ahead of time, said Majavu.