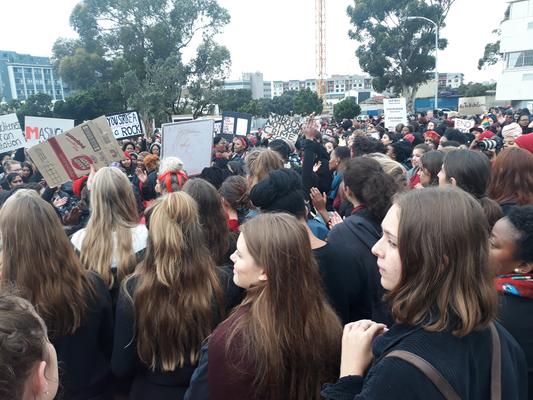 Hundreds of women of all races gather in Cape Town to protest against gender-based violence and march to parliament, #TotalShutdown, 1 August 2018. Picture: ANA

Hundreds of members of the #TotalShutdown movement today took to the streets of Cape Town to protest against gender-based violence.

The movement aimed to bring the country to a halt as women across South Africa gathered to protest against the rampant violence against women and children.

Venetia Orgill, founder of Discover Your Power, an organisation opposed to gender-based violence in Mitchells Plain, said she had joined the march in support of the women and children who need to be saved from abuse.

“So many women are looking for help, from being raped, being abused in marriages, in the workplace by colleagues, by bosses, by husbands, by brothers, by grandfathers and uncles.

“And within the community, especially where I work with homeless people of the street, so many women are abused and today I march for those who haven’t found freedom yet,” she said.

Orgill added women and child abuse had become so open “to a point where it has become a fashion that we dress ourselves in and that is not good”.

She further said she hoped that the march would send a clear message that women have had enough. 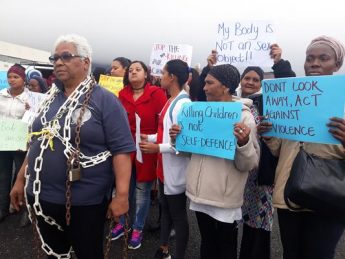 Jessica Booysen from non-governmental organisation Sonke Gender Justice said: “There are so many women and children getting raped and killed every day and I feel like its just fair and equally enough for women to come together to support this.”

She said she felt women’s rights were not given enough attention, highlighted by the rise in the number of women and children suffering abuse at the hands of men. According to Booysen, the cause of the high rate of gender-based violence was “justice not being served accordingly”, with rapists and murderers released from jail only to claim more victims.

A bystander, Trevor Flowers from Mitchells Plain, who is a single parent of two daughters, said he was disappointed that the march was only for women as not all men abused women and children. Flowers said he wished men opposed to gender-based violence were invited to take part in the march to raise awareness that there were men who also stand with the women in their fight against abuse.

“Even if they called us and told us to wear dresses in black and red, I would have come and I am sure a lot of men would have been here today. Because not all men are violent towards women and children in this country. I am a single father supporting my two daughters.”

National task committee member of the #TotalShutdown movement, Onica Makwakwa, said a memorandum of demands was developed from the inputs of ordinary women, NGO’s and all stakeholders who are affected by gender-based violence and addressed to President Cyril Ramaphosa and the government of the Republic of South Africa.

Among the 24 demands, the women said they wanted a strong message from the office of the president that gender-based violence is pervasive and widespread and cannot be tolerated at any level of society, and that included a commitment never to appoint any individual who had been a perpertrator of violence against women and children.

The government must commit to address and reduce gender-based violence, to commit and to announce the day of a national gender summit before August 30, the memorandum said.

The memorandum was accepted and signed by parliament’s Sergeant-at-Arms Regina Mohlomi, who told the women that she has been sent by the Speaker of the National Assembly to accept the memorundum on her behalf.