The party calls on Zimbabweans and the country's opposition parties to accept the electoral outcome. The Economic Freedom Fighters (EFF) on Friday congratulated Emmerson Mnangagwa on his election as Zimbabwe’s president following a day at the polls on Monday.

The EFF called on Zimbabweans, in particular opposition parties, to accept the results and continue with building a country based on peace and stability.

Ahead of the announcement of the electoral outcome, a representative from the MDC Alliance had appeared to hijack the stage at the events centre in Harare, and said they were rejecting the results because they had not been verified by party agents. He said the results were fake.

The EFF condemned the post-election violence that broke out and claimed the lives of six people who were killed when troops fired live rounds against the demonstrating victims, who alleged the votes had been rigged.

“We condemn all who mobilise violence to impose or oppose the electoral outcome. Africa no longer needs leaders who see violence as the solution to political problems. As a continent we have known enough violence that has only led to Africa’s deterioration,” the party said in a statement. 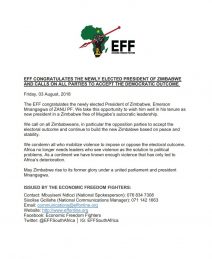 Congratulations Cde President @edmnangagwa and all peace loving Zimbabweans should accept the results. You fought a good fight honourable @nelsonchamisa and we remain inspired. pic.twitter.com/N1AIhyrVIk