Following the attack, both uniformed and undercover police will be deployed to do daily patrols where the incident took place. 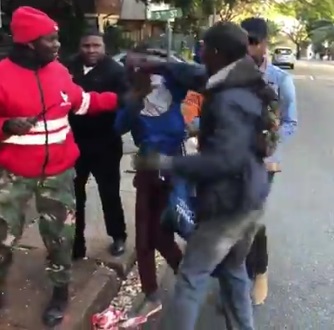 A video that has gone viral on social media shows a man robbed of his backpack by a group of attackers.

The man is then seen passing out briefly as the muggers search his pockets.

Upon regaining consciousness, he attempts to fight them off.

The men are then seen walking away while the victim calls for help while people walk past, ignoring him.

The incident occurred next to the South Gauteng High Court.

Following the attack, officers will be deployed to do daily patrols where the incident took place, News24 has reported.

“Due to the incident yesterday, because of the mugging, more than 20 officers will be deployed into the Small Street Mall on a daily basis from today, as well as undercover members,” said JMPD spokesperson Wayne Minnaar.

According to Johannesburg Central police spokesperson Captain Xoli Mbele, 20 undercover community patrollers would also be deployed in the area.

“They won’t be wearing any uniform and, should such an event happen again, they will be able to arrest the perpetrators.”

“This doesn’t sit well with us. We want people to be our eyes and ears in the fight against crime,” Mbele added.

An advocate at the court says some of his colleagues have been mugged nearby where the incident took lace.

“It frightens me. Safety should not be experienced only in Sandton, but also here in town. I am even afraid to walk to court alone,” said Modise Khoza.

According to another advocate who works at chambers nearby, Ahmed Cajee, his firm has been trying to get police to increase visibility in the area and do more about crime for some time.