Several buildings at the Hout Bay harbour were set on fire as protesters demanded a search for the missing man. 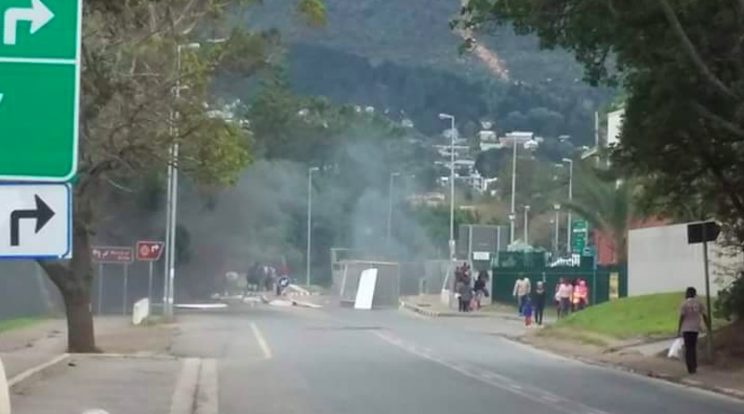 Protests that turned violent over the weekend in Hout Bay, Western Cape, have culminated in the arrest of three people.

The department of forestry and fisheries (Daff) office, as well as other buildings at the harbour, were set on fire.

An anonymous source in Hangberg said protesters had disrupted the Hout Bay market, causing it to be shut down on Sunday, News24 has reported.

The protesters left the market at 3pm, only to return to Hangberg, where they fired flares.

The cause of the protests is the alleged shooting and subsequent disappearance of a man, allegedly a poacher, by the police. The protesters want a search conducted to find the man.

According to GroundUp, the missing man is 25-year-old Deurick van Blerk. He was reportedly catching crayfish illegally with three other men when they were intercepted by a Daff patrol vessel.

According to police spokesperson Andre Traut, Van Blerk did not return home on Saturday, prompting his family to open a missing person docket.

But Daff said a misunderstanding lay at the centre of the protests, and that their officials, while present during the antipoaching operation, were on standby, and didn’t get involved.

According to the department, those protesting set the Daff offices on fire, wrongly thinking one of their officials was involved in the antipoaching operation they believed led to the alleged poacher being shot.

“The suspected poachers presumed that one of our officials Bernie Smal had been instrumental in the operation. Today, a huge crowd stormed Hout Bay harbour and burnt two of our offices and another group went to our official’s house and set it alight,” said Daff spokesperson Khaye Nkwanyana.

Smal had to be moved to a place of safety, away from the protesters.

“The police will continue to maintain public order in the area, and we have organised private security to guard Mr Smal’s residence and our property in the harbour,” Nkwanyana continued.

During the operation, the police’s special task force arrested two suspects at sea. The third, believed to be Van Blerk, jumped overboard, and is still missing. A fishing boat with crayfish and fishing nets were also reportedly seized during the operation.