The N11 has been blocked off by Newcastle SAPS and traffic officials due to protest action, which started in the early hours of this morning. Officials on site clear up the road. Images: Newcastle Advertiser

Traffic is at a standstill on various intersections on the N11 near Newcastle after protesters barricaded the road earlier on Monday morning, reports Newcastle Advertiser.

A portion of the N11 has been blocked off by Newcastle SAPS and the traffic department at about 7am because of protest action that began in the early hours. Traffic is backed up on the N11 due to protest action.

Officials on site have been hard at work clearing up the road and controlling the unruly crowd.

The road between the Utrecht and ArcelorMittal off ramps will remain closed for the next few hours to ensure the safety of road users. 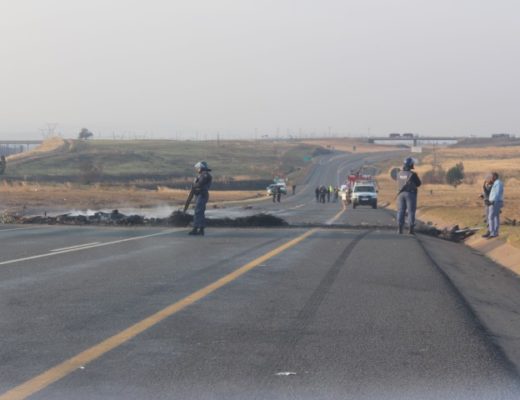 According to officials on site, the disgruntled residents of the area took to the streets at about 2am to protest about poor service delivery.

The residents remained next to the road, repeatedly demanding electricity as officials cleared up the rubble and residue of burnt tyres. An eyewitness who chose to remain anonymous relayed how the protesters threw stones at the officials upon their arrival, and allegedly stopped the protest when SAPS members fired back with rubber bullets.

Some of the residents warned they will resume their protest actions later today.

Motorists are cautioned to use alternative routes and avoid this area.