The minister says there is a worrying trend of some mining companies not meaningfully engaging the department on restructuring plans. In a statement issued on Tuesday, Mineral Resources Minister Gwede Mantashe said he was concerned by Gold Fields’ plan to retrench more than 1,500 employees at its troubled South Deep mine.

The company said the retrenchments were its latest attempt to turn a profit at its sole remaining operation in South Africa, which has lost the company R32 billion so far and is likely to shed 1,560 jobs.

Mantashe said the company’s planned job cuts are concerning, as they had not regarded processes in the Mineral and Petroleum Resources Development Act (MPRDA).

The minister met with the CEO and executives at Gold Fields on Monday where following discussions on the planned retrenchments, Mantashe requested that the company should adhere to processes outlined in section 52 of the MPRDA before shedding any jobs.

“We are beginning to notice a worrying trend where some mining companies do not meaningfully engage with the department on their restructuring plans and only brief us as a mere formality or tick box exercise, ignoring processes outlined in the law which are binding to every mining right holder,” Mantashe said in a statement.

The minister added a follow-up meeting between the department and the Mineral Council would be held to discuss investment, growth, employment and youth challenges within the sector and those faced by the country’s economy.

“It is our view that the spirit in which Gold Fields is engaging contravenes the agreed approach and the laws governing the sector,” Mantashe said.

The minister appealed to the company to engage with the department and labour unions over the possible retrenchments. 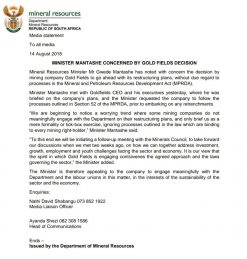