A man is seen using a child as a shield to avoid being detained by security. 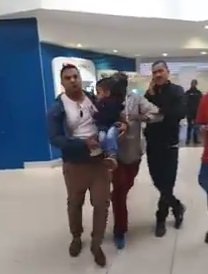 A video of a man using a child as a shield has surfaced.

The footage shows a man trying to make his way past two men who appear to be showing the man a certain direction to head to.

A security official can be seen walking to the man in an attempt to calm him down.

“Leave me, leave me,” shouts the man as he forces his way past the escort of men.

Bystanders scream in the video as the man jerks the child around in his attempt to stop his escort from following him.

Social media users appear to think the man was using the child to avoid being detained for a cellphone related matter. 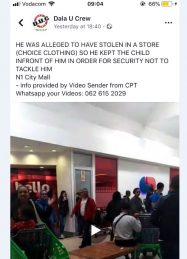 The location of the footage or whether the man was detained are still unclear.