White Sasol employees to go on strike on Monday

According to Solidarity, it will be the first time in South African history that white employees go on strike because of race based exclusion. 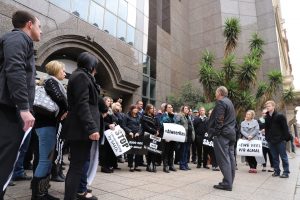 White employees at Sasol will go on strike on Monday in reaction to an exclusion based on race.

A total 83% of Solidarity members at the energy and chemical company in Secunda voted for the strike action scheduled for Monday.

The reaction by Solidarity members is to the company’s exclusion of white employees from an employee share ownership plan.

According to Solidarity, it will be the first time in South African history that white employees go on strike because of race based exclusion.  The Solidarity Chief Executive Dirk Hermann has called the Sasol strike a case study on the sense of exclusion white people are subjected to in general.

“We are going to launch a massive campaign by way of which people will be able to show their support to the Sasol employees.”

“Support for the strike has been overwhelming, which is indicative of the levels of frustration that are prevailing among our members. Sasol has simply gone too far. The rule that applies to employee share ownership plans at other companies, especially in the mining industry, is that it includes all employees, regardless of race. The underlying message that we are getting from our members’ response is that enough is enough.” Hermann said.

According to a statement from Solidarity, Sasol has announced an empowerment scheme known as Khanyisa where black employees will get shares worth R 500 000.  Khanyisa succeeds the Inzalo Scheme which failed financially, although it did include white people.

“Sasol’s scheme is in direct conflict with the mining charter and the practice in the industry. This scheme is an inflexible scheme only aimed at scoring B-BBEE points. It is not about empowerment of the workers; it is about the commercial value of a score card,” Hermann said.