In this shocking 30-second video clip, an elderly woman is seen suffering from a brutal beating and trying to grab the stick and stop her assailant. 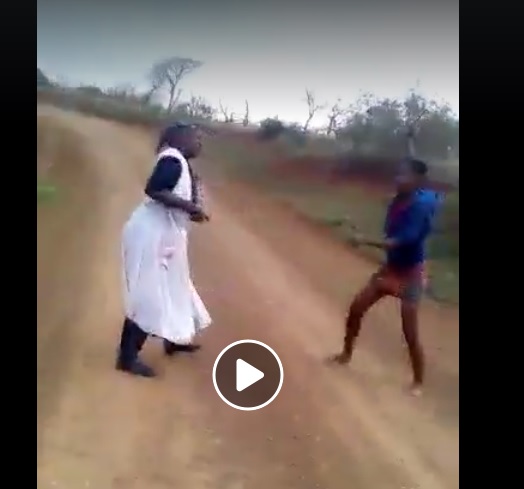 A 19-year-old teenage girl, who was arrested on Wednesday for allegedly assaulting a 59-year-old woman, made a brief court appearance at KwaHlabisa Magistrate’s Court on Thursday, Zululand Observer reports.

The suspect faced a charge of assault with intent to do grievous bodily harm, and was released without bail.

The arrest follows a video that was trending on social networks, showing the suspect beating her victim, Cabangile Ngcobo with a stick in the middle of a gravel road, asking her ‘Who is the bitch, Ngcobo?’

In this shocking 30-second video clip, Ngcobo is seen failing to cope with the beating and trying to grab the stick and stop her assailant.

At one stage she also tried to run but was unable to get away and the assault continued.

uMkhanyakude Police Cluster Spokesperson, Captain Jabulani Mdletshe said the suspect was released without bail and was expected back in court on 11 September.

Mdletshe said, after seeing the video on social media the police traced its origins and were able to establish that it came from Ezibayeni area in Hluhluwe.